Last week I showed the coding methodology that we use at Ronimo, which describes our workflow. This week we'll have a look at what our actual code looks like, which is defined in our coding style guide. The idea behind our style guide is that if all code is formatted in a similar manner then it's easier to read and edit each other's code. For example, reading a different bracing style or naming convention usually takes some getting used to, and we avoid that altogether by having a strict style guide that all programmers at Ronimo must follow. 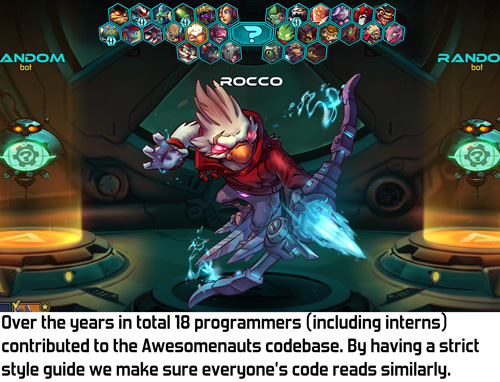 I haven't seen a whole lot of style guides from other companies, but from what I've heard our style guide is quite a lot stricter than what's common elsewhere. I'm not sure whether that's true, but I can totally imagine it is since I'm known for being precise (sometimes maybe overly much). Our style guide isn't set in stone though: there's an exception to every rule. If our style guide really doesn't make sense in a particular situation, then it's okay if a coder ignores it somewhere. Just as long as there's a good reason for it.

Some of the choices in this document are quite arbitrary. Sometimes alternatives would have been equally good, but without clear choices you can't have similar formatting for all programmers. This is especially true for bracing style. I know that this is a heated subject and while I have a clear preference, good arguments can be made for alternative bracing styles. (Still, it would have been nice if advocates of the other major style wouldn't have called it the One True Bracing Style... ;) )

A key element in our style guide is that I want code to read like English wherever possible. Variable and function names should be descriptive and only the most commonly known abbreviations are allowed. Brevity isn't a concern of mine, readability is.

Not all points in our style guide are about formatting though. Others are about actual language constructions. C++ is a rich language with an enormous amount of possibilities, but quite a few are too confusing or have too much risk of bugs to actually use. For example, nesting ternary operators is totally possible in C++, but the result is rarely readable so we disallow it altogether.

Our style guide also contains some rules that are intended to make cross platform development easy. On consoles you usually can't choose your compiler, so you have to work with whatever Nintendo, Sony or Microsoft have chosen, including the limitations of their compilers. We've researched what features of C++ each supports and have forbidden some of the newer C++ constructions that we think might not work on one of the consoles. Since we're not currently actively developing on some of the consoles we went by documentation only though, but I'd rather be too strict here than too lenient.

Another thing you can see in our style guide is my dislike for complex language constructions. C++ allows for some highly impressive stuff, especially using templates and macros. While I appreciate that these tricks can sometimes be really useful, I generally dislike them whenever they become too difficult to read. In the rare cases where these tricks are truly needed they are allowed, but usually I prefer if complex language constructions are avoided.

One particularly hotly debated point in coding styles is whether to mark class member variables. If the Car class has a float speed, do we call that speed, mSpeed, _speed or something else still? I've chosen to simply call this speed. Here too the reason is that I want code to be as similar to English as possible. The more prefixes and underscores there are, the further it moves away from natural language and the more difficult it becomes to just read code and understand it like you would text.

However, there's a good reason many programmers mark their member variables: it's very important in code to know whether a variable is a class member, a function parameter or a local variable. This argument is true, but I think we have that covered elsewhere: our style guide contains limitations on how long a class or function can be. If a function is short and fits on one screen, then it's easy to immediately see where variables are coming from. I think if classes and functions are short enough, then markers for member variables aren't really needed.

Note by the way that the rule for how long functions and classes can be is the one broken most internally. Sometimes it's just really difficult to split a class or function in a neat way. In the end the goal of our style guide is to produce clear code, not to hinder that by forcing clumsy splits. Still, there's real skill in figuring out how to neatly split classes and functions into smaller, more maintainable units, so if you're not super experienced yet then more often than not a neat split is possible and you just don't see it. In my opinion the ideal size of a class is anywhere between 200 and 400 lines, but a rule that strict isn't feasible so what's listed in the style guide is more lenient.

Now that I've discussed the reasoning behind our coding style guide, let's finally have a look at what it's actually like!


That's it, our coding style guide! ^_^ While I imagine you might disagree with a bunch of the specific rules, I think it's useful for any company that does programming to have some form of a style guide. Our style guide can be a good starting point for creating your own. I'm quite curious: what's the style guide like at your own company and how do you like it? Do you have one at all?
Posted by Joost van Dongen at 11:43