Why I made a graphics-only trailer of Proun

I just released a new trailer of Proun! I am really happy with the atmosphere in this one, so have a look and enjoy! Be sure to turn up the volume and set to full screen for the optimal Proun Trailer Experience (tm):

(The beautifully brooding music I used for this trailer was created by Igorski. You should really check out the other weird, atmospheric music on his website.)

As you can see, this trailer has a pretty different approach to the previous trailers: it is entirely in slow motion and doesn't show the player's vehicle. Quite an odd choice, really, so why did I go this way?

For starters, I was inspired by a recent trailer of Fez, a beautiful indie pixel game* that is currently in development. I love the atmosphere in this trailer, which shows slowly rotating landscapes with atmospheric music, and I figured something similar would work nicely for Proun as well.

However, there is quite a bit more to it.

Proun is a game, not just a piece of graphics. Proun's graphics are very readable and do not distract from the gameplay, so I think the gameplay and graphics complement each other well. However, they also hide each other: when you are looking at the graphics, you will probably bump into an obstacle. And when you are racing really well, you will probably be so focused on avoiding obstacles, that you will not notice the artwork. Lots of people have told me that they didn't even notice the beautiful graphics until they watched someone else play. So I wanted to make a trailer without the gameplay, to let the graphics really shine, just for once.

Since Proun is a racing game, it also needs some information for the player. What lap are you in, what position are you placed, how is your time? Interfaces almost always distract from the actual game world. They are often pretty much a necessary evil in any game, usually to inform or enable the player**. In Proun, the graphics are all about minimalism: creating as strong an image as possible with very few elements. All those necessary numbers in the interface totally break with Proun's simplicity. So in this new trailer, I liked being able to for once leave out all the gameplay elements, making the graphics stronger. 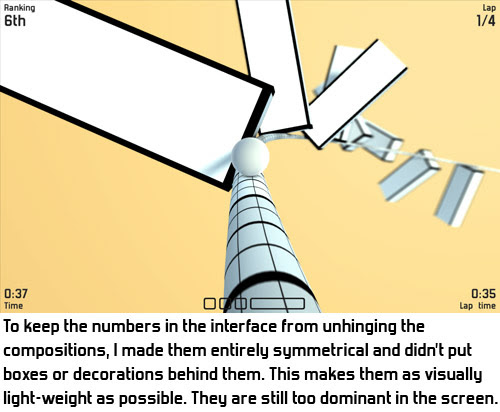 Finally, why is the player's vehicle not there in this trailer? Where is The Big Ball At The Centre Of The Screen? Well: since it is always there, it would make the entire trailer very uniform. In a previous blogpost, I talked about designing the camera movement to prevent motion sickness. Tying the camera to the ball works really well, but results in a ball that is always at the exact centre of the screen, at the exact same size, and always pulling the player's eyes towards it. Leaving it out here, allows the player's eyes to drift around the screen more easily.

So, a lot of deliberate thinking went into designing this trailer. I hope it worked and resulted in some powerful imagery! ^_^

**Although in really old games, the interface was sometime also used to make the playing field smaller on the screen and thus achieve acceptable framerates, as Peter Molineux recently explained in this talk about the classical game Populous.
Posted by Joost van Dongen at 21:17 5 comments: