Game balance is often approached from the angle of the pro-gamer: how strong are things when used by a skilled player? However, the balance as it's experienced by beginners is equally important, since a large portion of the playerbase will never reach pro skill levels but will still want to have a fun experience. Today I'd like to discuss three different approaches we've used in our games Awesomenauts and Swords & Soldiers II to make the gameplay fun for beginners but also balanced for experienced players.

The big challenge here is that in a complex game with varied characters/weapons/factions/etc. it's nearly impossible to achieve perfect balance under all circumstances. Balance is influenced by almost everything and if you want variation, then that variation is undoubtedly going to upset the balance. For example, if some characters are faster than others, then having maps of different sizes can greatly change the balance on one map compared to another. The alternative is to make all maps the same size, but that's boring. For this reason balance is a moving target that you're constantly trying to get closer to but a certain amount of imbalance is (grudgingly) accepted in almost every game. 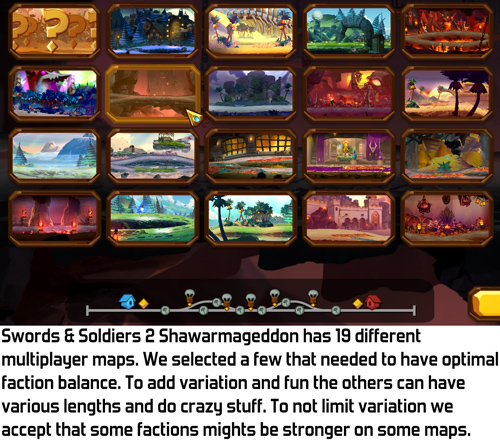 To make a competitive game fun for players of all skill levels, the ideal situation is to make it balanced for pro players, intermediate players and beginners alike. An example of striving for this goal are the changes we've made to the Awesomenauts character Gnaw. At some point Gnaw was heavily overpowered for beginning players, but mediocre at best for pro players. That meant that if we had nerfed (weakened) Gnaw for the sake of the beginner experience, Gnaw would have become totally useless for pro players. If simple nerfing is not an option, then what to do instead?

When a character is overpowered specifically in matches with beginners, this is often either because the character is too easy to play well, or because the counters are too difficult to figure out and perform. The nice thing is that if we can change the difficulty, it won't matter much for pro players: if the character becomes harder to play, pros will still master it. And if the character becomes easier to counter, that also doesn't matter for pro players: their opponents already mastered the counters anyway. Realising this doesn't make fixing the balance easy, but at least it gives us a starting point for where to look for a fix. 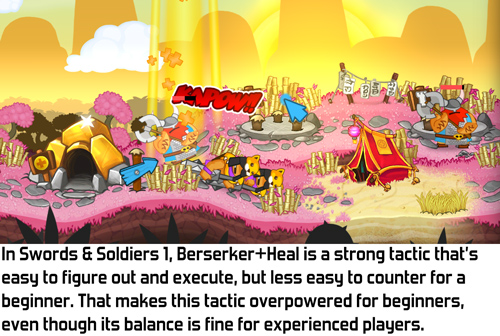 To modify Gnaw's difficulty for beginners, our designers made a number of changes over the years. Most of these revolved around making it more work to be effective with Gnaw. For example, initially Gnaw's Weedlings (little creatures Gnaw can leave behind to attack enemies) would live forever. One of the changes we made was that Weedlings would die after a while, requiring Gnaw to place them again. Weedlings were also changed to start weaker and become stronger over time. The result of these changes is that the player needs to be a lot more active to keep their Weedlings in the right places. Also, if the enemy has destroyed the Weedlings, Gnaw can't just replace them with equally strong ones right away. 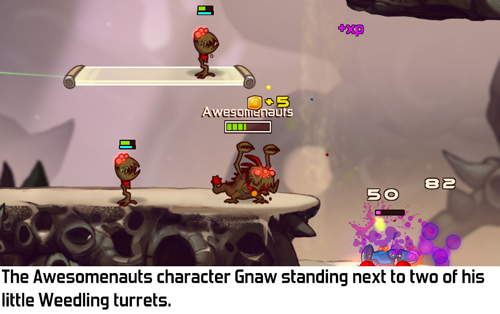 Of course these changes also influenced the balance for pro players, but combined with some further tweaks we managed to keep Gnaw about equally strong for pro players while making him harder to play well for beginning players. Hence the pro balance remained similar while the beginner balance was improved.

Another Awesomenauts character with a similar problem was Ayla. Here too we made changes to make her harder to play well and easier to counter. While our designers did manage to improve Ayla's balance for beginning players, she remained problematic to counter for beginners.

Therefore when going free-to-play we employed a different tactic. In the free-to-play version of Awesomenauts, characters need to be unlocked with Awesomepoints, which the player can collect by playing the game. Characters have different prices. For example, some characters are difficult to play so we made them expensive to keep beginners from unlocking them right away. Since we had a problem with Ayla not being so much fun to play against for beginners, we chose to make Ayla expensive as well. This way few beginners will have Ayla and thus few beginners will encounter other beginners who are playing Ayla. This feels like a crude solution, but sometimes crude is the best one can do. 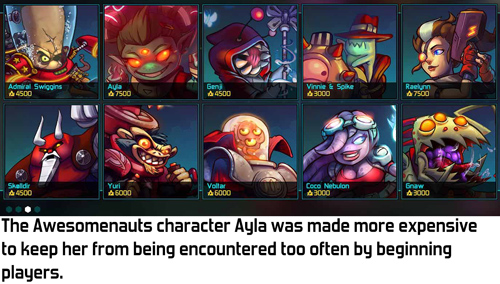 An even cruder solution that might be considered is that if a character is too damaging for the beginner experience, then maybe it's worthwhile to nerf the character to the point where it's okay for beginners, despite that this makes the character not viable for pro play anymore. An important thing to realise here is that with a cast of dozens of characters, a single character not being viable in pro play doesn't make that big of a difference since there are so many other options. However, a single character being overpowered for beginners will mean that lots of beginners play this character and it will ruin many matches. 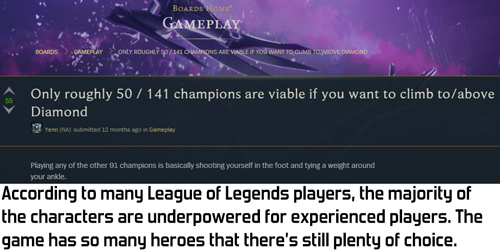 The third example of fixing beginner balance that I'd like to discuss today comes from our real-time strategy game Swords & Soldiers 2. This game has 3 wildly different factions (Vikings, Persians and Demons), which gives enough headaches in terms of balance already. However, on top of that there is also a tactic that may be balanced, but that's just not fun for beginning players: rushing.

Experienced Swords & Soldiers 2 players can have a lot of fun harassing each other's economy as early as possible, forcing the opponent to spend their gold on defence instead of upgrades, or maybe occasionally even winning the game in under a minute. However, beginning players rarely start a match effectively. They're likely still reading some upgrade descriptions or thinking about what to do next. The result is that if the opponent employs even a very ineffective rush tactic, a beginning player will still be overwhelmed and lose in less than a minute.

For beginners this is highly frustrating, but since rushing is so much fun for pro players we didn't want to remove rush tactics from the game altogether. Instead we came up with something that's just for beginners: Starting Gates. Starting Gates are gates in front of each player's base that need to be destroyed before the base can be reached. This slows down rush tactics a lot and gives the defending player quite a lot of extra time to respond once the enemy soldiers come into view. Starting Gates are truly only for beginners: in matchmade online matches they're not placed if both players have played a bunch of online matches already. 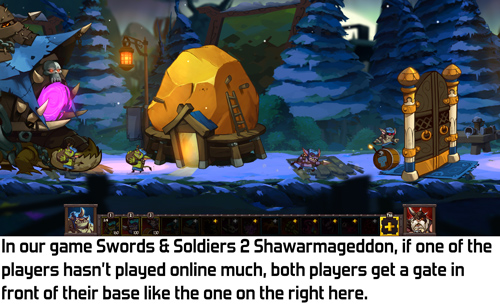 Making the balance as fun for beginners as it is for experienced players is a hard and sometimes nearly impossible challenge. In this post I've given examples of 3 different tricks we've employed to improve beginner balance: Gnaw was made more difficult to play without making him stronger, Ayla was made more expensive so that beginners would encounter her less, and rushing in Swords & Soldiers 2 was changed for beginners by introducing a new mechanic that only applies to beginner matches.

These are all examples of looking at balance as a creative challenge, not just as a topic that's about spreadsheets and tweaking numbers. Have you used any nice tricks to improve balance? Please share in the comments!
Posted by Joost van Dongen at 21:33 No comments:

New Song: A Century Sails By

I've finished a new cello song! :D This one started out as a travelling theme for a game concept with a little boat, but will end up on my album as the intermezzo where the story jumps from the 1850s to the 1950s. The title reminds of both uses. I hope you like it!

Musically the idea behind this song was to play with delay/echo: two of the instruments get a rhythmic echo. This is a fun little musical effect with a big impact, as it results in these instruments constantly playing chords with their own previous notes. It's easy to mess this up by choosing the wrong progression of chords and making it sound dissonant and ugly (or to do this on purpose, if dissonance is the goal). During most of the song I steer away from this and choose notes that sound nice with the notes that came before. However, at the end of the cello melody (at 1:10 in the video) I go from C# to C. This is very dissonant but at the same time brings us back to the chords at the start of the song. I really like the tension this creates. This effect is so strong that I needed to keep the music in the same chord for four bars before starting the chord progression again, just to make it settle back in and feel good.

As with all my songs, sheet music for cello can be found at music.joostvandongen.com, including a recording of the song without the cello, to play along to.

I've also made an arrangement of the song for an acoustic quartet with two violins and two cellos. Since acoustic instruments can't do a real echo without additional equipment, I've added in some extra notes where possible to mimic the echo. This captures the feel of the song surprisingly well, as I experienced when I played this version with a couple of friends a few years ago. Sheet music for this version is also on music.joostvandongen.com.
Posted by Joost van Dongen at 17:01 1 comment: