The many meanings of the confusing word 'lag'

'Lag' is one of the most confusing words used in gaming: it's used to describe wildly different problems. This makes communication difficult: when a player is complaining about 'lag', what's his problem exactly? Is he talking about his internet connection, framerate or input delay? So today I'd like to list the different meanings of the word 'lag', both to reduce confusion and to explain why all of them are important. I've grouped them into three main types.

It can be difficult to know exactly what's going on, but it would already help a lot to always at least specify which of the rough groups you mean, instead of just saying 'lag'.

Note that this post is not specifically about our own games. These problems can happen in most games, although the exact impact depends on how the game was been programmed.

All of these problems can have many causes, like a slow internet connection or your roommate downloading a torrent over the same connection. There's one common cause that's relatively easily solved though: WiFi. WiFi increases ping, causes jitter and packet loss and, worst of all, pingspikes. If you can, never play online games over WiFi. Connect to your router with an ethernet cable instead. Check this blogpost from the League Of Legends devs to see how bad WiFi really is.

Delay between input and seeing the result

Low framerate is also often called "lag". Players sometimes don't realise that there are different types of low framerate. Being precise when describing your problem helps a lot if you ever ask anyone for help with how to solve your framerate problems.


Framerate problems and input delay are both often decreased by turning off VSync. This does come at the cost of getting screen tearing though. Which you prefer is a matter of personal taste.
Posted by Joost van Dongen at 15:04 3 comments:

While creating levels for Awesomenauts and Swords & Soldiers 2 our artists often struggled with how to create more depth. All those background elements from one area would slide into view in other parts of the level, limiting how deep the backgrounds could be. For the Starstorm level in Awesomenauts I've added a trick to our editors that solves this problem: scissor rectangles. It's a neat little trick that not only makes Starstorm have backgrounds with much more depth, but also makes rendering them a lot more efficient. So let's have a look: what's the problem exactly, and how do scissor rectangles solve it? 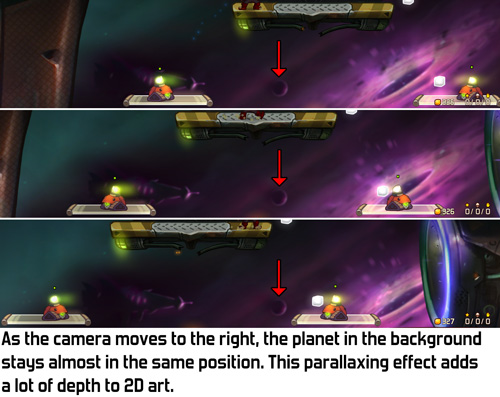 In a 3D game the solution to this is simple: just put a wall in between these two rooms. But this is not a 3D engine. This is a purely 2D engine and walls that go into the distance are not supported. Heck, we don't even have a z-buffer to figure out what parts would be in front of or behind that wall! Also, what if we don't want a wall? What if we want to suggest really deep spaces but don't want to put endless walls into the distance in between them?

The solution our artists used in older Awesomenauts maps is that such deep rooms can't be close to each other. For example, in Ribbit IV the top part of the level is a lush jungle that continues far into the background. Originally my colleague Ralph also added deep caves in the bottom part of the map, but parts from the jungle became visible in the caves, and vice versa. So Ralph made the caves less deep. The jungle parts are still rendered behind the caves, but because the caves have a solid wall close to the camera the jungle isn't visible there anymore. 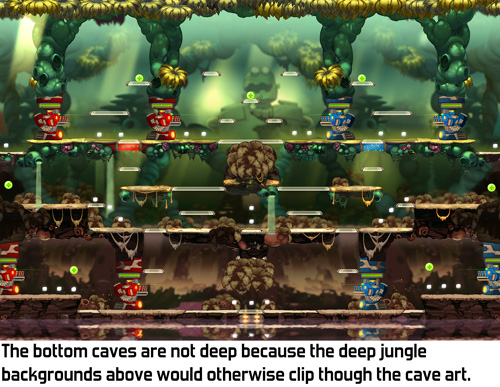 Not only is this very limiting for our artists, it's also a huge waste of performance: it causes a lot of overdraw. 'Overdraw' is when several objects are rendered on top of each other. The more objects are rendered on top of each other, the higher the overdraw is and the worse the framerate gets. Sometimes that's needed to get a certain effect, like when having lots of overlapping smoke particles. But here it's a waste: the jungle isn't even visible, so why render it? High overdraw is the number one performance drain in Awesomenauts, so not doing this would be quite wonderful. (For more on overdraw have a look at this post: Optimising Special Effects In Awesomenauts.) 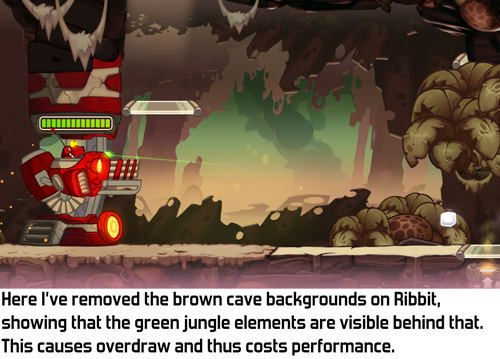 I had been thinking about this problem for a while, mostly coming up with solutions that were quite a lot of work to build, when one day I realised that videocards have a very simple feature that solves exactly this problem: scissor rectangles! The basic idea of a scissor rectangle is that when rendering an object, you tell the videocard to only render the parts of it that are within a certain area on the screen: the scissor rectangle. Everything else is cut off. It's like a mask in Photoshop, but in-game. 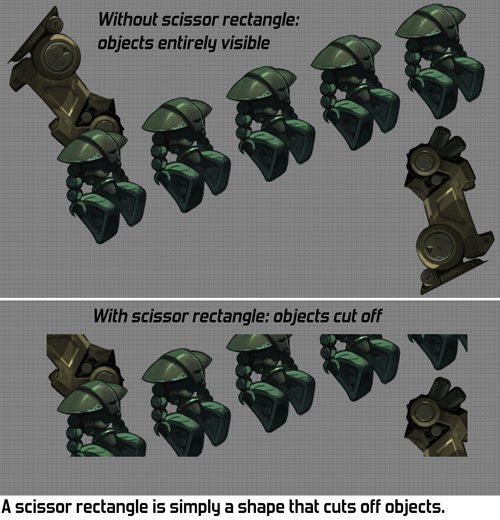 Scissor rectangles are a very simple and very limited feature. They only do rectangles that are aligned with the screen. So you can't have a rotated rectangle, or a shape that's more complex than a rectangle. If you want any of that you'll need to resort to more involved tech, like the stencil buffer, which isn't efficient to recreate differently for each object rendered. I was looking for something simpler, something that could be changed for each object rendered without causing a performance hit. Scissor rectangles provide exactly that. 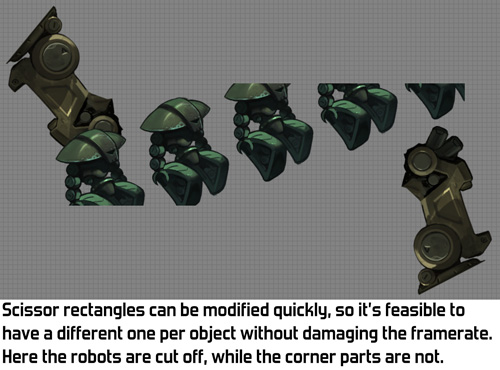 Our levels are mostly decorated by my colleague Ralph, using art drawn by Gijs. On the Starstorm map Ralph used scissor rectangles extensively for the first time and I love the result: he put a lot of depth and detail in the backgrounds and the framerate is higher than on other maps because the scissor rectangles reduce overdraw. Here's a short demo video:


For any programmers that read this, here are some implementation details I've encountered. Feel free to skip this list if you're not a programmer. ;) 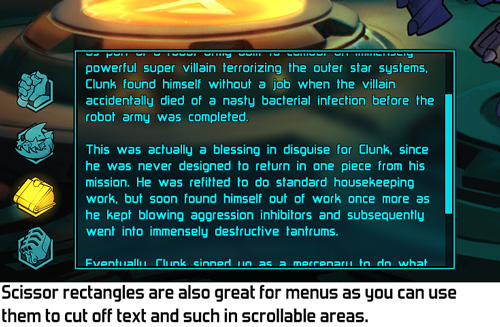 So there you have it: scissor rectangles! Not only did they enable our level artists to make deeper, richer levels, but they also improved performance by reducing overdraw and were quick and easy to add to our engine.
Posted by Joost van Dongen at 15:55 3 comments: