The psychology of matchmaking

Matchmaking is a touchy subject and this has previously made me somewhat hesitant to write about it in an open and frank manner. Today's topic especially so, since some players might interpret this post as one big excuse for any faults in the Awesomenauts matchmaking. However, the psychology of matchmaking is a very important topic when designing a matchmaking system, so today I'm going to discuss it anyway. For science! :)

While we were designing the Galactron matchmaking systems I did quite a lot of research into how the biggest multiplayer games approach their matchmaking. The devs themselves often don't say all that much about it, but there's plenty of comments and analysis by the players of those games. The one thing they all have in common, is that whatever game you look for, you'll always find tons of complaints from users claiming the matchmaking for that particular game sucks. 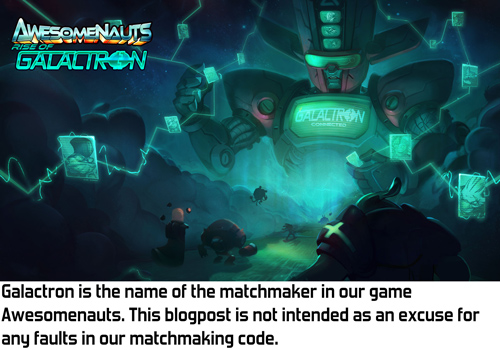 My impression is that no matter how big the budget and how clever the programmers, a significant part of the community will always think they did a bad job regarding matchmaking. Partially this might be because many games indeed have bad or mediocre matchmaking, but there's also a psychological factor: I think even a theoretical 'perfect' implementation will meet a lot of negativity from the community. Today I'd like to explore some of the causes for that.

There's a strong psychological factor at play here: for many people their human nature is to look for causes outside themselves. I think this is a coping mechanism: if you're not to blame, then you don't have to feel bad about yourself either.

Of course there is such a thing as better or worse matchmaking. That players use matchmaking as a scapegoat shouldn't be used as an excuse to not try to make better matchmaking. But it sure makes it difficult to asses the quality of your matchmaking systems. Whether your matchmaker is doing well or not, there will practically always be a lot of complaints. The more players you have, the more complaints.

For this reason it's critical to collect a lot of metrics about how your matchmaking is objectively doing. We gather overall metrics, like average ping and match duration and such, but we also store information about individual matches. This way when a player complains we can look up their match and check what happened exactly. This allows us to analyse whether specific complaints are caused by problems in the matchmaker, are something that the matchmaker can't fix (like a beginner and a pro being in a premade together) or whether the user is using matchmaking as a scapegoat for something else. 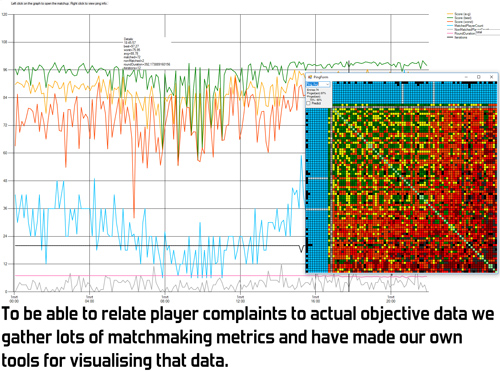 Another problem for matchmaking is that player's don't have a single, predictable skill level. The matchmaker matches a player based on their average skill, but how well they actually play varies from match to match. One match they might do really well, and then the next they might do badly. For example, maybe the player gets overconfident and makes bad decisions in the next match because of that. Or maybe the player is just out of luck and misses a couple of shots by a hair that they would normally hit. Or maybe the player got home drunk from a party and decided to play a match in the middle of the night, playing far below their normal skill level. These are things that a matchmaker can't predict. This will often make it seem like the matchmaker didn't match players of similar skill. Sometimes this might result in a teammate who would normally be as good as you but happens to play like a bag of potatoes during this one match in which they're in your team.

While this problem is not truly solvable by matchmaking, there are some things developers can do to improve on it. For example, in Heroes Of The Storm you select your hero before you go into matchmaking. This allows the matchmaker to take into account that you might be better at some heroes than at others. If it detects that you're playing a hero that you haven't played in a long while, then maybe it should matchmake you below your skill level. I have no idea whether Heroes Of The Storm actually does this, but it's certainly a possibility. This would allow detecting some of the cases in which a player is normally really good, but is currently trying something new that they haven't practised yet. 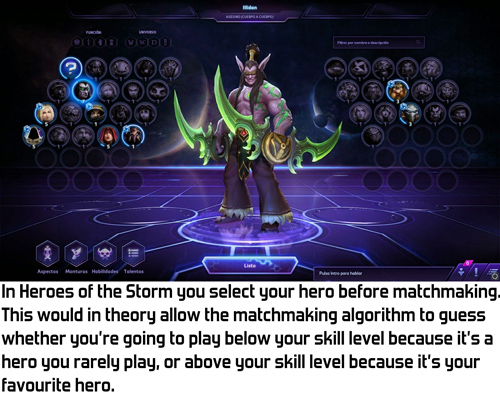 However, this particular trick comes at a heavy cost, which is why we decided not to put it into Awesomenauts: if players select their hero before matchmaking happens then matchmaking is severely limited in who can play with whom, which damages other matchmaking criteria. (I've previously discussed this in my blogpost about why you need huge player numbers for good matchmaking.)

A very different kind of psychological aspect is that players are often bad at estimating their own skill level. The following example of this is something that I have no doubt will be recognised by many people who play multiplayer games. A while ago I played a match in which a teammate was constantly complaining about how badly I was playing and how I was causing us to lose the match. However, looking at the scoreboard I could see that he was constantly dying and was by far doing worst of all players in the match. Apparently that player didn't realise that he was much less good at the game than he thought he was.

There's more to this than anecdotal evidence however. The developers of League of Legends have described that on average, players rate their own skill 150 points higher than their real MatchMaking Rating. (That part of the post has been removed in the meanwhile, but you can still find it here on Wayback Machine.) As they also mention there, psychology actually has a term for this: it's called the Dunning-Kruger effect. A League of Legends player analysed a poll about this here and gives an excellent explanation of how it works:

As some readers suggested, all of these psychological factors invite an interesting thought: would it help to give players more control? After all, if you have no control you blame the system, while if you do have more choice, you also have yourself to blame and maybe accept the results more. Giving players choice over matchmaking is in many ways old-fashioned and reminds me of the early days of online multiplayer, where you selected your match yourself from a lobby browser. The common view these days seems to be that players expect a smooth and automated experience. They don't want to be bothered and just want to click PLAY and get a fun match. Or at least, most devs seem to assume that that's what players want.

For Awesomenauts I've actually been curious for a while what would happen if we removed the automated matchmaking and instead relied entirely on opening and selecting lobbies. The modding scene would surely thrive a lot more that way, but how would it affect player experience and player counts? It would be a risky change and also too big a change to just try though so I doubt we'll ever get to know the answer to that question. Also, I'm not sure whether our current lobby browser provides a smooth enough experience for making it that important.

I do think it's interesting to explore this further though. I wonder what would be the result if matchmaking were from the beginning designed around being a combination of automation, communication and player control.

Before ending this blogpost I should mention one more psychological aspect of matchmaking: the developer's side. As a developer it can be really frustrating to get negative comments on something you've spent a lot of time on. Understanding why can help in coping with this frustration. Just like matchmaking can be a scapegoat for players after losing a match, the psychology of matchmaking can be a scapegoat for developers after getting negative feedback from players.

None of the psychological factors discussed in this post are an excuse to just claim that the matchmaking in a game is good despite players complaining. However, for a developer it's really important to realise that these factors do exist. Understanding the psychology of matchmaking allows you to build better matchmaking and helps to interpret player comments. I have no doubt that I've only scratched the surface of this topic, so I'm quite curious: what other psychological aspects influence how matchmaking is experienced by players?
Posted by Joost van Dongen at 15:39 21 comments: