Awesomenauts and Swords & Soldiers are both 2D games that have been designed for high resolution HD screens. So how do they look on old CRT televisions with their low SD resolutions? The obvious answer seems to be that they should automatically look great: the art is super crisp, because it was designed for a higher resolution. However, what you may not realise, is that too crisp is not a good thing!

The problem lies in anti-aliasing, and in graphical details. Anything that the artists have drawn that is only 1 pixel wide in HD, will start to flicker on an SD screen. This happens for the simple reason that not every pixel will be shown on an SD TV. The art has been made for 1920x1080 pixels on the screen, and only 720x576 of those will be shown on an SD television. As a character moves over the screen, his details will flicker in and out of view as they are sometimes on a pixel, and sometimes in between two pixels. 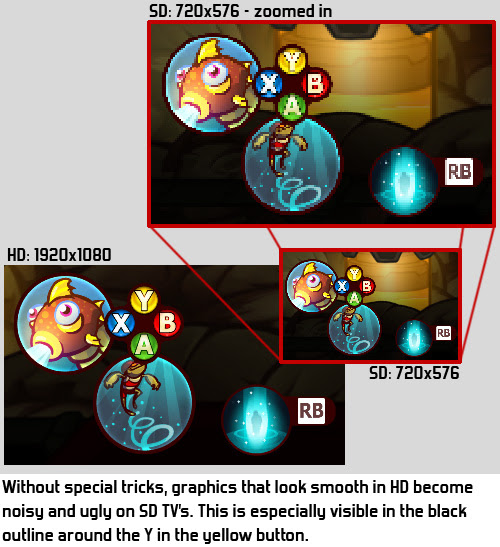 This is especially problematic for anti-aliasing: in a 2D game, anti-aliasing of edges is drawn in Photoshop and doesn't require any work from the game. But on an SD television, the pixels that make the anti-aliasing may fall in between two screen pixels, meaning that anti-aliasing is often entirely lost.

(Note that this is a problem that is specific to 2D games: in 3D mipmapping is used to solve this problem, and anti-aliasing is rendered in real-time by the videocard.)

So when we render our HD 2D graphics to an SD television, they look noisy and too crisp. Now how do we solve that?

The solution is actually pretty simple. To get an image that is both smooth and sharp in SD, we use an easy trick in both Awesomenauts and Swords & Soldiers: on SD televisions, the game is rendered at a higher resolution than what is shown on the screen, and then sampled back to the lower screen resolution. This is a standard technique in non real-time rendering and is called supersampling.

So first we render the game at a higher resolution (1080x864 instead of 720x576). Then this high resolution image is rendered to the screen by sampling the area beneath each screen pixel. For each screen pixel, I take four samples from the high resolution image and use the average of that. This way really small details are not lost. Instead, they become more subtle, since they are averaged with the pixels around them.

So what resolution do we use for the high resolution image that we sample from? Easiest would be to use twice the screen resolution, but that requires rendering at 1440x1152, which is really high and wastes a lot of performance. I experimented a bit, and it turns out that rendering at 1.5 times the resolution is already enough to get smooth graphics.

This is a good thing, because twice times the resolution does tend to become quite expensive. In fact, at some point SD TVs had a lower framerate than 720p HD TVs, which is why I started experimenting with the exact resolutions to find a better trade-off between performance and quality. At 1.5 times the resolution, the framerate is smooth again. 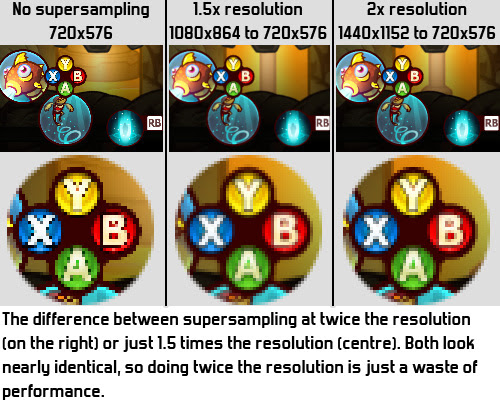 The results look good, and they mean that I don't have to bother with storing all textures on different resolutions for HD and SD televisions, which keeps our art pipeline simple.

This post may seem to be about a really minor detail, but on old SD televisions, this really makes a big difference. Without this technique, both Swords & Soldiers and Awesomenauts didn't look good on low resolutions.

I find it really interesting that if you want to make a quality game, you really need to worry about all kinds of seemingly small details. All those little things in coding, art, sound and design are what makes a game polished, and this post has been about just one little example of the kind of polishing we do on our games.

Next week, I expect to have something really cool to show here, so see you then! ^_^
Posted by Joost van Dongen at 12:07