Please ignore that horribly pretentious title, I just couldn't withstand this chance to put my name in that list... ;)

Last week the Stedelijk Museum in Amsterdam had an art game evening, so they put some games in their galleries. The Stedelijk Museum is the biggest modern art museum in The Netherlands and they decided to put Proun in the middle of their throne room, the one with their most important pieces. So there was my Proun, between Matisse, Malevich, Warhol, Lichtenstein and Mondriaan! Awesome! Especially Mondriaan's paintings were an important inspiration for Proun, so it is great to see my game next to six real Mondriaans! 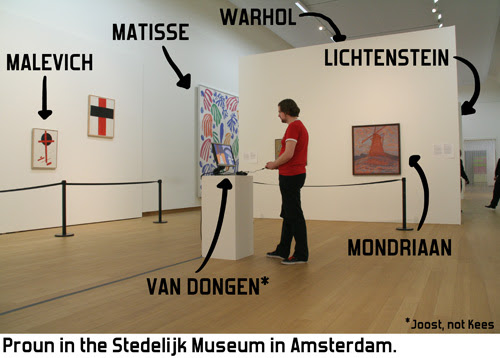 The photo was taken by Richard Boeser, by the way. He is the creator of Ibb & Obb. Ibb & Obb was also there and it is a fantastic game. It hasn't been released yet, but I got a chance to play it and this is one of the most fun coop games I have ever played. Nice! So here is a little bit of marketing for his awesome game, which I believe should come somewhere early 2012. Be sure to turn the sound on to hear the music as well!


Ibb & Obb, by Sparpweed and Codeglue.
Posted by Joost van Dongen at 22:32