Last week I showed the various styles that our art team concepted for Awesomenauts. But I kept the most important one for this week: the one we actually chose to make! The Purple Style. We chose this one and worked on it for several months! This is what it looked like: 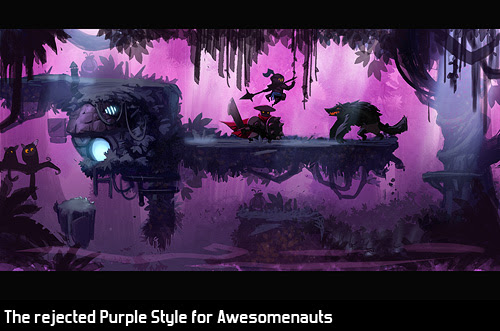 I still consider this image to be one of the pretties things to come out of Ronimo so far. So just imagine how bad I felt about letting this one go. It was the right choice, though: this purple style is extremely difficult to read. It looks great, but in which teams are those characters? How could we visualise what skills a characters is using, when the colour palette is so limited and the backgrounds so dense?

This style finally got cancelled when, while playing around with the gameplay, it turned out that Awesomenauts was going to be very chaotic. This chaos was part of the fun, but a chaotic game requires a lot of clarity in the art, which is just not possible in the Purple Style. So we switched to something that was inspired by the likes of Earthworm Jim and Ratchet & Clank.

Since we worked on the Purple Style for several months, lots of cool concept art was made for it. Our ideas for the setting were not very clear, but some keywords were "Shangri La" and "eastern". 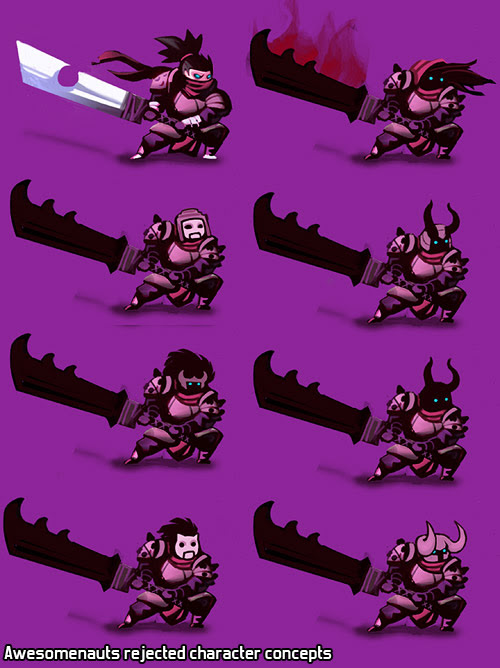 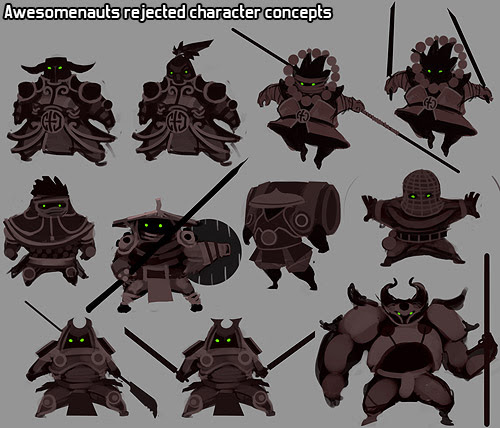 When we started working on Awesomenauts, we were quite unhappy with Flash and wanted something else. Flash was too difficult to handle for anything but flat shading, and we wanted more details and gradients in our artwork this time. So the idea at first was to create 3D models and render those to textures. This turned out to be too much work, though, so when our former intern Marlies Barends showed us After Effects and how excellent it is for animating detailed 2D art, we switched to that for all our character animation.

However, in the meanwhile I had already been playing around a bit with how to get those 3D models to look good for a 2D game. A couple of years before that I had made a 3D model of Captain August (a webcomic by Roderick Leeuwenhart), so I added some basic animation to that and created a couple of cartoon materials in 3D Studio MAX to see whether that would work. It doesn't look as 2D as I wanted, but it does look quite interesting, I think:

I also tried dropping that guy in the 2D environment art that we had: 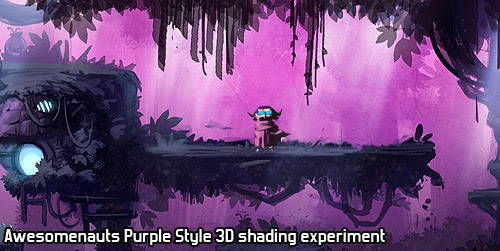 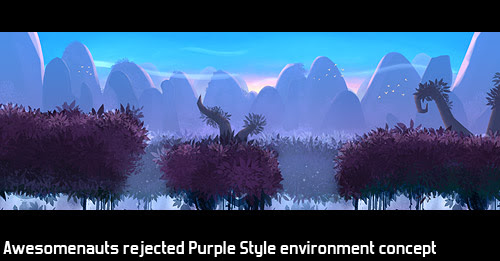 Finally, while looking through our concept art archive, I came across this one, which I had never even seen before! I really like the flowing lines here, so I'll end this post with this great piece of linework: 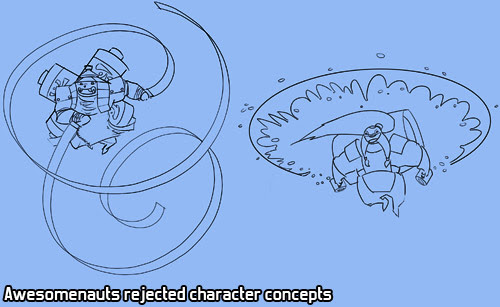 Next week, I'll explain what process we use at Ronimo to involve all 16 developers in choosing a visual style for our games. It is difficult to involve so many without grinding to a halt in endless discussions and brainstorms with way too many people, but I think by now we have found a pretty good process for this!
Posted by Joost van Dongen at 17:51