The latest Awesomenauts patch increased the framerate a lot for players with older videocards, especially during fierce battles. We managed to optimise our special effects without making them look noticeably different. Today I would like to explain how we did that!

Before I dive into the details, let me first give some background. In a 2D game like Awesomenauts, most objects are just a square with a texture on it. The texture contains an image, and you only see that image, not the entire square. However, the videocard renders the entire square. So from a performance perspective, it doesn't matter how much of the texture is actually visible. The entire square is rendered and the every pixel uses performance! Our artists know this, so they try to crop the image to have as few transparent pixels as possible (without changing the actual looks of the end result, of course).

Since objects in Awesomenauts contain so many (partially) transparent pixels, we cannot easily detect whether an object is hidden entirely behind another object or not. So we always render every object that is on the screen, from back to front, regardless of whether an object is actually visible or not. All objects are rendered on top of each other until the image is complete. 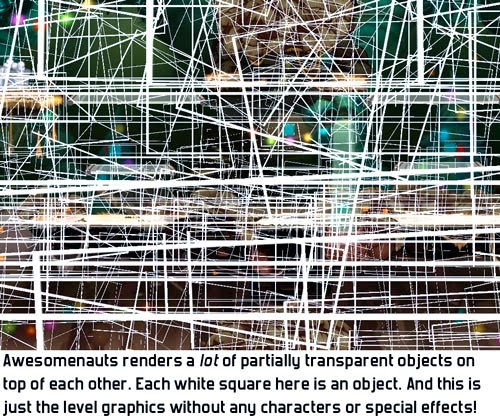 The fun thing, however, is that modern videocards are totally okay with that. However, for slightly older ones, it might become a problem to pull this off fluently...

In a previous blogpost I explained how I abused my depth of field blur as an excuse to render the backgrounds in Awesomenauts on a much lower resolution. This greatly reduces the number of pixels that need to be rendered every frame, but it only helps for the background, since the rest of the scene needs to be sharp.

Since the background are optimised this way already, the biggest remaining overdraw in Awesomenauts happens during special effects, mostly those of nauts' special skills. This is because they have a lot of overlapping particles for smoke, fire, dust and debris. Having several of those special skills on screen at the same time decreased the framerate on older and mobile videocards too much. This is extra problematic because during fierce battles, high framerate is needed most! 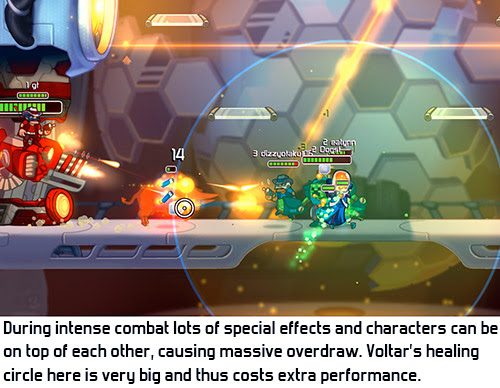 Once I figured out that overdraw was the cause of the framedrops we were seeing on older videocards, the solution seemed simple: decrease the number of particles on screen. The difficulty, however, is that it is difficult for artists to optimise things without being able to see what they need to optimise. Having a ton of large particles for thin smoke looks very subtle, but eats performance like crazy. And if an effect needs to be optimised, what part of that effect is the problem exactly?

So I made a small addition to our engine to visualise overdraw. Internally we have a shortcut now to enable this, and when this is pressed, the screen shows how often each pixel is rendered. White means a pixel is rendered 85 times (!), while black means it is rendered 0 times. Technically, this is a very simple thing to make: all objects are simply rendered on a very dark additive blend mode. So each rendered object adds a little bit of brightness.

This is not just informative, but also looks pretty awesome! Have a look at this video of going through the menus and then some gameplay with Skølldir to see how weird and cool this looks:

As you can see, the character itself is not every expensive to render, since it is only one square. The problem comes from the tons of particles.

Using the overdraw visualisation, our artists (in this case mostly Koen, Ralph and Gijs) were able to quickly identify which parts of which special effect needed to be changed. These changes are usually pretty simple: 40 smoke particles that are 10% opaque, look nearly exactly the same as 20 smoke particles that are 20% opaque. So in most cases the trick was to drastically decrease the number of particles and then just modify some colours to compensate for that.

The video above shows what the overdraw looks like after these optimisations were already done, so here are some comparison shots that show how massively the overdraw was decreased while hardly changing the looks of these effects: 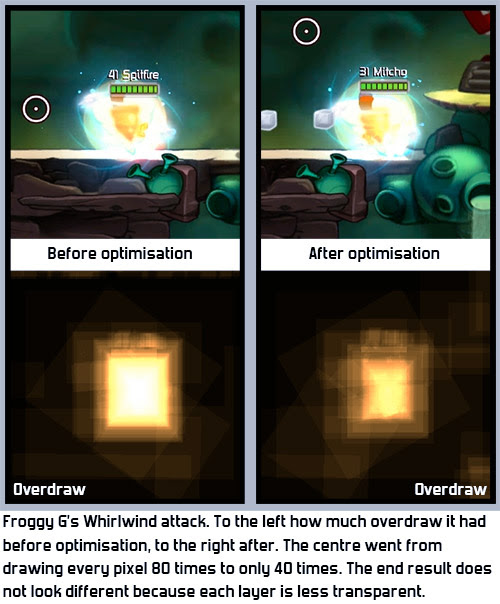 We tested the results on our Mac (even fast, expensive Macs usually have mobile videocards, which are not very fast and far from ideal for gaming) and indeed the game runs a lot smoother now. Several users reported that while they could previously only run Awesomenauts smoothly on Normal graphics quality, they can now run on High!

These improvements were released on Steam in patch 1.14 two weeks ago, so I hope players with older videocards are enjoying the smoother framerate they are getting!
Posted by Joost van Dongen at 11:52