The surprisingly many subtleties of designing crits

Crits (or "critical hits") seem like a pretty straightforward topic: there is a certain chance that you deal more damage, and that's about it. It is easy enough to calculate average damage and balance based on that, and beyond that it seems like just a choice whether your game has weapons with crits or not. However, in practice it turns out that there are a lot of subtleties to crits that are not immediately apparent. In Awesomenauts we have had various implementations of crits and each time more subtleties surfaced. So today I would like to talk about their many aspects.

Crits can be applied to any weapon or attack and their core element is chance: there is a small chance that a weapon does extra damage. Usually this chance is low, below 30%. Instead of damage, the crit might also add other effects, like a stun or knockback. Crits are mostly seen in RPGs, where they are a nice way of spicing up the weapon variation. A sword that does 10 damage feels quite different from a sword that does 7 damage and has a 25% chance of doing 19 damage. The average damage output of these two swords is the same, but they feel and play very differently. Crits also add extra variation to levelling and upgrading: one can upgrade not only the base damage, but also the crit damage and the crit chance. 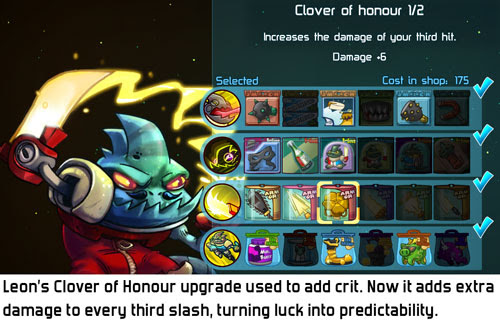 Crits are often a fun and interesting mechanic. While a normal sword always has the same result and is thus entirely predictable, a sword with a crit chance makes the player curious for every next hit. “Will it crit?! I hope it will crit!”

Adding chance to a game adds unpredictability. Having a lot of unpredictability greatly changes the feel of a game. A great example of this is Mario Kart. In Mario Kart when you grab a pick-up you usually get a random item and the effectiveness of the items varies massively. Picking up the right item at the right time often makes the difference between winning or losing the game. This is great for beginning players: even if they are playing against much better opponents, there is still a chance that the beginner might win because she has some lucky pick-ups. This makes a world of difference in comparison to purely skill-based games, in which the beginner will basically always lose until she becomes as good as her opponents. 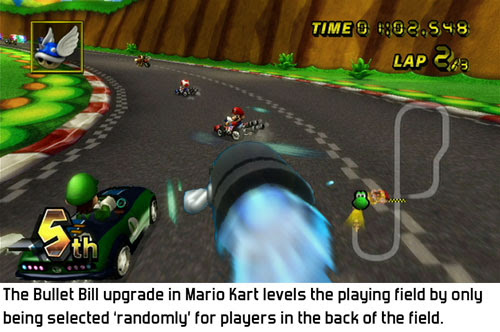 Luck also has a soothing effect. If you lose because your opponent was better, then the player can do little but blame her own lack of skill. This can be frustrating. On the other hand, if luck is involved, the player can always blame that, which is much easier to accept. Most losing players need scapegoats to be able to cope with their own failure. Luck is a great scapegoat, just like the referee's mistakes are in soccer.

Knowing that players need a scapegoat actually helps in understanding player feedback. Any competitive online game has players complaining about balance, and as a developer it is important to realise that part of that is completely unrelated to the actual balance, and is just players needing a scapegoat to be able to accept losing that match. (By which I am of course not suggesting that balance in Awesomenauts is perfect. I am merely saying that a part of balance complaints are caused by players needing a scapegoat instead of actual problems in the balance.)

The above text may make it sound like crits only have benefits, but this is absolutely not the case. The big problem with crits and luck in general is that they take away part of the competitive nature of a game. If a player invests hundreds of hours into becoming highly skilled at a game, then losing a match because the opponent got lucky just plain sucks. Competitive players generally hate luck with a passion. This is the reason why in the end, we removed Leon's crits and turned them into a completely predictable consecutive-hit system.

Bluntly summarising today's blogpost, one could claim that crits and luck make a game more casual, while complete predictability make it more hardcore and competitive.

The title of this blogpost said I was going to talk about the many subtleties of crits, but it turns out that there are so many that I cannot cramp it all into one single blogpost. Therefore I will come back to this topic next week and talk about how luck in games is rarely just a roll of the dice, and how modifying crit chances in the wrong way can be painfully destructive to balance.

Edit: Here's a link to that next blogpost: How chance in games is rarely just a roll of the dice
Posted by Joost van Dongen at 22:35