The gross imperfections of tuning in music

As a cellist, one of my biggest challenges has always been to play notes at the exactly correct pitch. While the keys of a piano and the frets of a guitar make sure that those instruments basically always play notes at the right pitch (as long as the instrument itself is tuned correctly, of course), instruments like a cello and a violin allow the musician to play notes at any pitch, not just at the pitches of real notes. This gives endless possibilities, but it also means that if you put your finger just one millimeter too high or low, it already sounds out of tune and horrible. 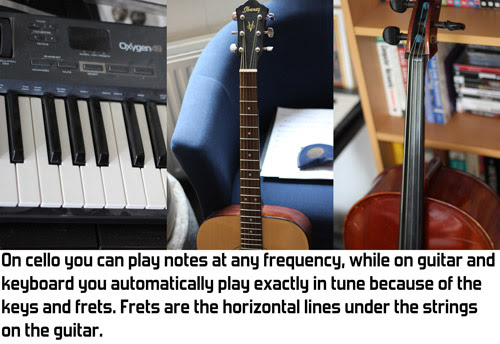 Playing in tune has always been a big topic to me, always striving for that oh-so-difficult 'perfect pitch'. Not that I am horribly good at it, but that is exactly why I practice so much to get closer to it. This is why it came as such a shock to me to learn that there is no such thing as 'perfect pitch': several tuning systems exist and they all come with different opinions on what the exact frequency of specific notes should be. They are also all flawed in their own way. Our modern tuning system is called equal temperament and this is not because it allows for perfect pitch, but because it spreads the pain and problems equally everywhere, instead of having some parts perfection and some parts complete horror.

How can this be? Why is there no perfect system for tuning? To understand this, let's have a look at the frequencies of notes in our modern musical system, and how they relate to each other:


What you can see here, is that each next note has a higher frequency than the previous, and A' is exactly twice as high as A. This way playing an octave (A and A' at the same time) sounds really good, because their frequencies are exactly double. In fact, it sounds almost like a single note.

What you can also see here, is that the distance between two notes grows the higher we get. This way every time we jump 12 notes for an octave, we get exactly the double frequency. Each next note is approximately 5.95% higher than the previous, so notes are spaced equally when measured relatively.

This all looks fine and dandy, and it is something I have known for years. However, it gets hairy when we look at the distance towards that base note, the A. Note the last column:


This may look fine, but keep in mind that I previously mentioned that an octave sounds so pleasing because the frequencies are exactly doubled. This goes for other intervals as well. The second-best-sounding interval is at exactly 1.5x the base frequency, so that would be A (440hz) plus E (660hz). However, now look at the table again and note that E is not at 660hz, but at 659.26hz. Slightly out of tune! The same goes for the fourth interval (A+D): the D is not the pleasing 33.33% higher, but the slightly off 33.48%.

This may seem like a tiny difference, but it is actually quite audible, and these aren't even the worst: the major third (A + C#) is at 25.99% instead of at 25%, which is a much bigger difference.

Letting go of the requirement that all distances are equal, we can choose new tunings that make sure that certain intervals produce perfect chords, while others may sound much worse. This is indeed how tuning worked in the 18th century: some chords sounded perfectly in tune, while others sounded much worse than they do today, making them practically unusable. I guess this explains why baroque music with many sharps or flats is extremely rare: it just doesn't sound acceptable with the tuning used back then. Most software for writing music makes it quite difficult to compose with more than the western standard 12 notes, but I have been told that some of the older Prince Of Persia games are notable because the composer abused the MIDI system to play real 24 tone Arabian music. I couldn't find any info on this online though, so I don't know whether that is true.

It is interesting to hear 24 tone music since it sounds quite alien and weird to the western ear, especially when used in a way like this on a special kind of piano:

So why is this all relevant today, now that equal temperament is the golden standard that nearly everyone in the wester world uses? First, it is important to realise that it is not perfect and thus pitch is also not perfect. Comparing a note I play on my cello to one other note might make it sound in tune, while comparing that very same note with another note might result in an interval that is slightly off. This is not because I am playing it wrong, but because the intervals are simply not perfect in our modern equal temperament system.

The second reason this is important to me is that until recently I played in the Kunstorkest, a small amateur orchestra that plays baroque music. Indeed, this is music from the age of meantone temperament, so knowing how it was originally intended is important to us! Not that a hobby musician like myself has the skill to play all the subtleties of this difference, but it helps to at least understand what is going on here and why sometimes the director wants a note played slightly differently. To conclude, here's a short recording of a piece we played with the Kunstorkest:

Email ThisBlogThis!Share to TwitterShare to FacebookShare to Pinterest
Labels: music