The gameplay of my live performance game Cello Fortress is nearly finished, but the graphics are still basic blocks with some crude textures. Recently I've been working on figuring out what style I want for the game, and I've ended up with two possible styles that I like: one dubbed "Surreal Architecture" and the other "Rough Polygons". Since I have a hard time choosing, I figured I'd just ask here. Which style should I use for Cello Fortress?

I've also added the pros and cons of each style as I see them. Several are just my personal taste so let me know in the comments if you disagree.

The basic idea of this style is that you travel through a world of surreal architecture. The surrealism is of the subtle sort: on first sight it might look like normal classical architecture, but if you stop and think for a second you realise this cannot be: buildings are too big and repetitive, it makes no sense to have a city with nothing but church towers, and why is there an area with giant organ pipes?

This style is inspired by the graphic novel series Les Cités Obscures (also known as Cities Of The Fantastic or De Duistere Steden) by Schuiten and Peters. To get an idea of their style, have a look at these beautiful images. To a lesser degree it is also inspired by the Rork series by Andreas (picture).

As concept art I've made some basic environments in 3dsmax and even rendered a video as if it were the game: 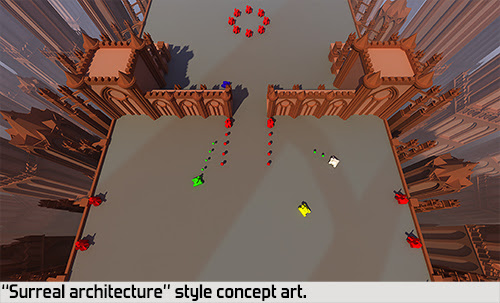 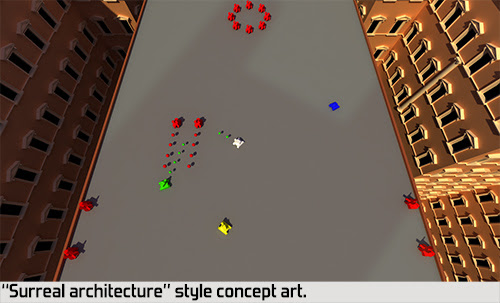 This style is a lot simpler. It is mostly about big, untextured polygons. It has a rough rook and most of the potential beauty of this style comes from the lighting. Using a combination of pre-baked lightmaps and some simple tricks I think I can achieve a global illumination-look as in this image.

A big benefit of this style is that is does not distract from the gameplay. Cello Fortress is such a weird concept that I often need to explain quite a lot to the audience and this style won't distract from the core. It also helps that the gameplay will remain very readable under poor lighting conditions: I often perform with Cello Fortress at festivals and it is not rare to have a beamer projection on a rough wall with too much environment light. Such conditions make the game look a lot less bright and crisp than a normal gaming environment. 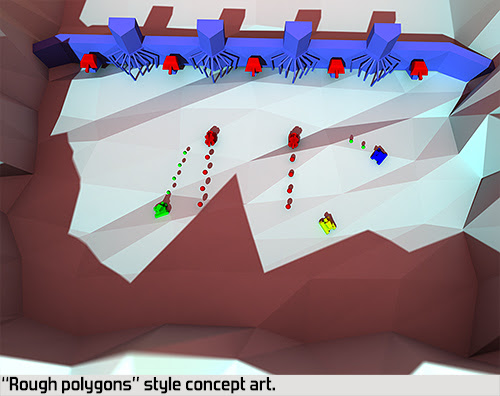 Pros
Cons
Why am I not sure which style to choose? The Surreal Architecture style is much more fun to make and would stand out more, but it just doesn't seem like the best choice for the game. It has little to do with the rest of the concept and would distract from what it's all about: the live cello performance.

Which do you think I should make, and why?
Posted by Joost van Dongen at 15:13