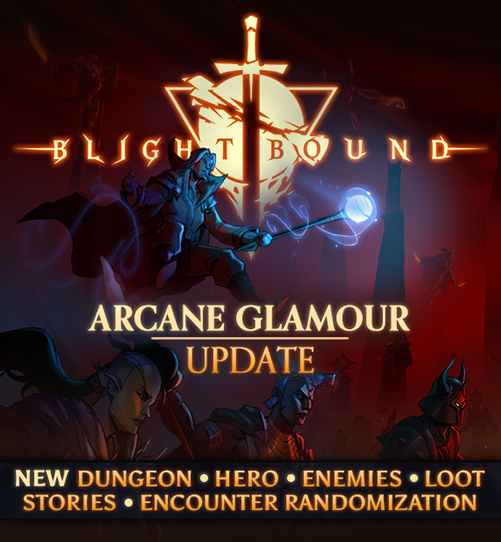 Today we've launched our biggest update for Blightbound on Steam yet! I'm really proud of what we've achieved with this one, since it not only adds a lot of cool stuff, but also makes big improvements to existing things in the game. Menus have been overhauled, the tutorial has been improved and many minor issues have been fixed. Also, some features that limited players and didn't really achieve their goals have been removed: blight, notoriety and limitations on character select.

Our previous major update is less than two months away and I think it's pretty impressive how much we've cranked out in that time. Now for the most important thing: I hope our players will like the new changes and improvements!

The new character in this update, Roland of Stendhall, also comes with a short story about how he joined the refuge. I had a lot of fun reading how vain Roderick Leeuwenhart depicts him. You can read the story (as well as the other ones) here: I, Roland of Stendhall. I'm especially font of Roderick's invention of the word magesplain: "The geologist saw all sorts of difficulties in this plan and was keen to magesplain them to me."

You can find the full list of changes in the patch notes.