Many games seem to share the same set of movies and comics as their main source of inspiration, but for Proun I went an uncommon (for games) and very different route: my starting point was the abstract art from the first half of the 20th century. As long is the Fauvists play dead, I suppose this is pretty much my favourite art period.

When I had the core gameplay up and running, I was looking for an art style for it and quickly came across Mondriaan: 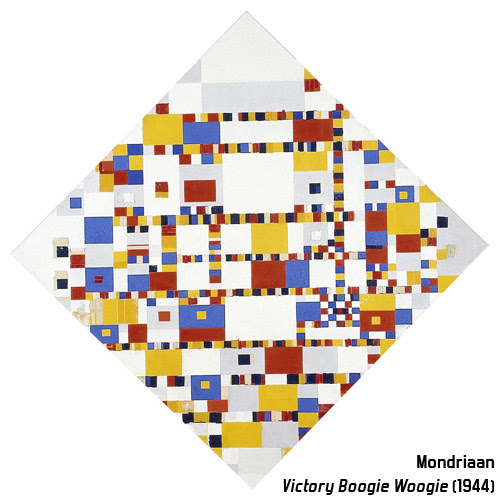 However, although awesome, this doesn't really fit Proun: characteristic to style is that there are no diagonal lines or curves. Making playable levels for Proun like this would be almost impossible.

So I looked a bit further and stumbled into Kandinsky. His work went through a couple of phases, from his early figurative art, to very expressive abstract art, to the more geometric abstracts of his later years. The expressive stuff is definitely my favourite, so after discarding Mondriaan, I decided to try something like this: 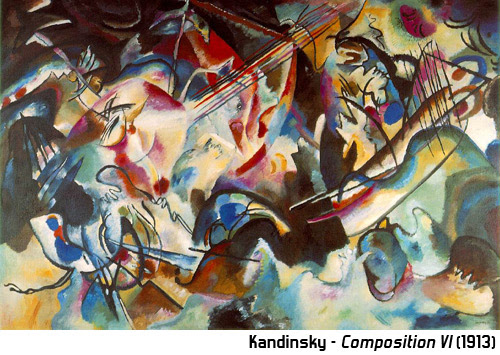 I started experimenting with shaders to achieve this art style, but at the time (wow, four years ago already!) I didn't have the slightest clue how to achieve this. The best image I have of those experiments shows what abominations I was creating (of course, the background grid was not intended to remain that way): 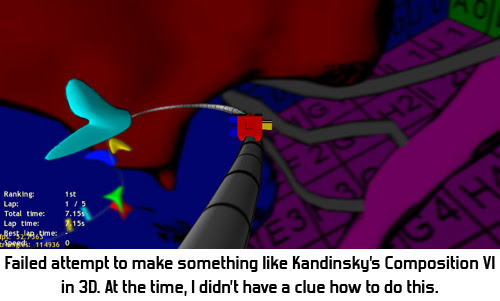 Today I have some ideas for how to tackle such a style, but at the time I lacked the skill, so I jumped into something a lot simpler in terms of shapes and colours: 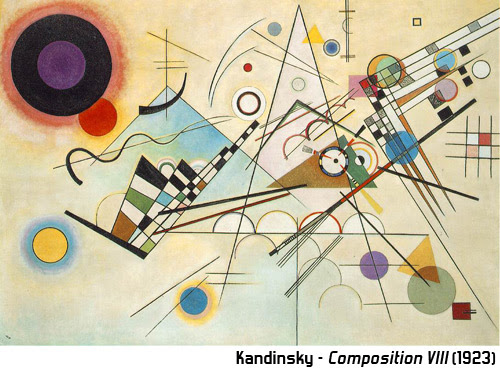 Still Kandinsky, but later in his life. To me, this period in Kandinsky's work misses the intensity of earlier work, but replaces this with an incredible liveliness, and through the jumble of shapes comes a beautiful balance and unity in composition and colour. Kandinsky always surprises me with that such an amount of hues and shapes can somehow form something coherent.

What interests me most here is that while translating such paintings to a 3D game, I ended up somewhere pretty different. Even though Kandinsky's influence is clearly visible in Proun, I think my game has a new and unique vibe that is totally it's own. In this image the similarities may be at their most visible, but it is still very different:

Funny thing is that the discarded Mondriaan kept floating in my mind unconsciously. Only after finishing the second track did I realize that some parts of it were very similar to De Stijl, the group that Mondriaan and Rietveld were members of:

(Woohoo, a good reason to put my name next to such great artists! How insanely pretentious!)
Posted by Joost van Dongen at 10:34