Any level designer knows the word leashing: to lure the player into the right direction using things like light, colour and bright shiny power-ups. If you put the player in a large, open forest, you can still be almost certain where the player will go by making the entire forest slightly dark and lighting one patch really brightly. The player feels like he has the freedom to go where he wants, but he is on a psychological leash and the level designer gets to pull it. Come here, doggy, fetch the stick!

In track 2 in Proun, at the end of the lap there is a tunnel. There are obstacles in this tunnel and the player needs to avoid them, like this big yellow circle thingie: 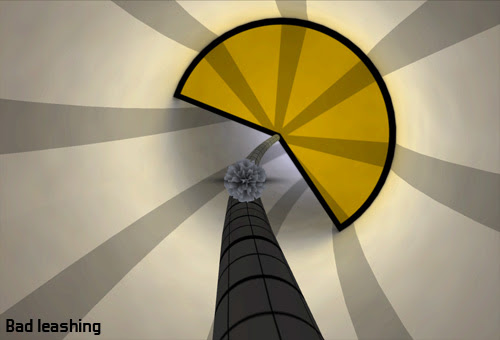 Oddly, during playtests, I saw that about one in four players would rotate towards the obstacles, instead of avoiding them. Really strange, because in every other part of that track they immediately understood where they needed to go.

Then one of my testing victims (Marlies Barends, accidentally also the creator of this awesome animation) explained to me what was going wrong: the obstacle that you need to avoid has a bright colour, while the tunnel is a dull grey. Also known as: bad leashing!

The solution is simple: I put the light behind the obstacle instead of in front of it. Now the obstacle is in shadow and the tunnel behind it is brightly lit: 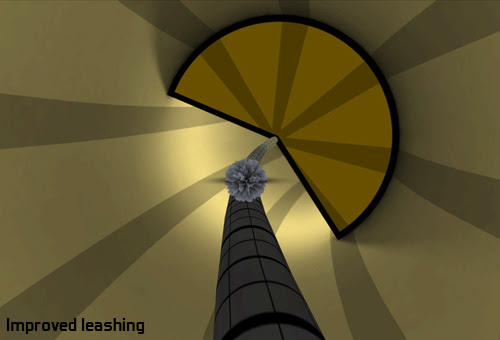 I haven't tested this on real dogs yet, but I expect them to know where to fetch the stick now! :)
Posted by Joost van Dongen at 09:56