Perspective is a beautiful thing. Look at an object from a different side, and you get something new. Move your head a little bit and sides disappear and appear, lines align or dis-align. All kinds of things are happening to the world in front of you, just by moving around.

I have been fascinated by this for years now. My mother sometimes asked me why I was staring at something and slightly moving my head to the left and right. Well, to change the composition, of course!

I am aware that this is probably a quite strange hobby of mine, but let me give an example to show what I mean. The photograph below was in De Volkskrant (a Dutch newspaper) a while ago. (Photo by Joost van den Broek)
I think this is a powerful composition. The big boat, which is balanced in the view by the small boat to the right edge. The strong perspective in the containers, which leads the eyes towards the distance, where the ship is heading. Almost all important lines here are either exactly vertical or horizontal, or they lead to the same point at the horizon. Simply a strong composition.

However, something else in this photograph caught my eye. There is a meta-shape here. The edge of the ship and the horizon exactly coincide, creating a new line. This line does not actually exist, but the perspective creates it. It only exists when this scene is looked at from this angle. It is a meta-shape emerging from perspective. 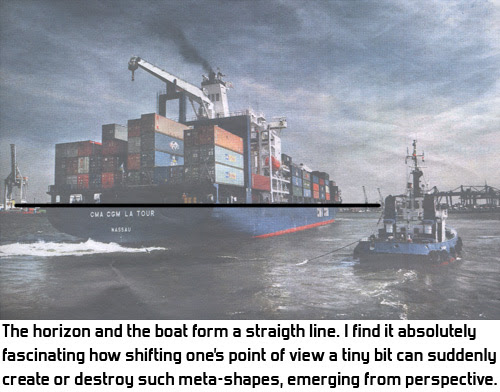 In Proun, I have partial control over the camera. The player can rotate it around the cable, but cannot look left or right. So I can create meta-shapes like this, and unconsciously, the player will sometimes see them. In the screenshot below, two balls form a new meta-circle that only exists from this perspective. 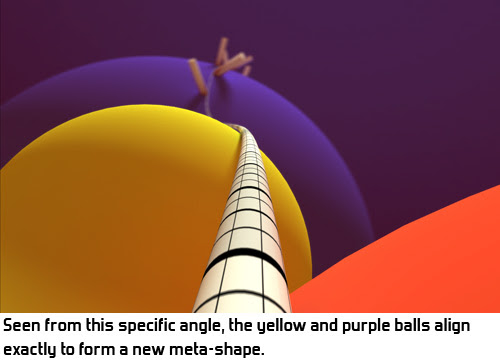 By the way, last week, when I watched the incredibly beautiful Tron: Legacy in 3D at the cinema, I realised that this effect is actually destroyed by 3D. Tron features a lot of incredibly strong compositions, but I feel that the 3D tears them apart. I think the lines and shapes form a stronger image when flattened. So to my surprise, this was actually the first time that I wished I had watched a movie in 2D instead of 3D.

Finally, there is something else hidden in the photo of the boats. By just taking the main lines, I can create an abstract composition. This is a very simple thing, but since the original image has such a strong composition, these lines could form the basis of a new composition in Proun. I could place coloured objects to create a 3D scene that features these lines when looked at from a certain angle.

I won't deny being a crazy idiot, staring at random things while moving my head around. But at least I can pretend it has a purpose! ^-^
Posted by Joost van Dongen at 23:08