The lasagne theory of game design

This is the first of a series of posts about lasagne. Lasagne is one of the most inspiring things that ever came out of Italy, and thinking about it is truly food for thought (sorry, I know that joke was bad). In today's post I would like to introduce to you my lasagne theory of game design, followed next week by the lasagne theory of coding. 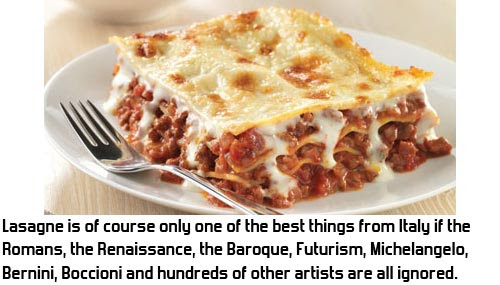 Image from a Tesco lasagne recipe

The game design theory I would like to discuss today is probably not super original, but I think lasagne is a useful tool that can be used to analyse a game. The point here is that lasagne contains layers, just like gameplay. A game like our just released Awesomenauts at all times has various game systems active in the player's head, and during different phases of gameplay they will vary in prominence and importance. To strike the right balance and make the game fun for a long time, it really helps to recognise and analyse the layers of the lasagne.
An example will help to make this clear. Let's look at a couple of the gameplay layers in Awesomenauts:

These layers all coexist at the same time in Awesomenauts, but they can still be viewed as separate parts and it would be possible to remove or add layers. For example, if items were not free to choose, then the build experimentation layer would disappear, while all others would remain in place. We could in theory have also added a strategic layer by allowing the player to upgrade his base and directly build droids to fight for him. So although all of these layers work together to form the game, it is very well possible to analyse them separately.

Let's categorise these layers. The first question is: what makes a layer fun? This is where we see a huge difference between the combat layer and all the other layers: combat is about reflexes and fast action, while all the other layers are more about thinking and decision making. Key to making the combat layer fun is that all actions have satisfying sounds and effects. Lots of animations, particles and explosion effects make throwing dynamite a fun thing to do all by itself and even more so in combat. Making combat fun also requires that the gameplay contains counter-moves, and that it rewards good reflexes and quick decision making.

Most other layers however mainly become fun based on Sid Meier's famous quote: "A game is a series of interesting choices." For example, the tactics layers are only interesting if the decision is not always obvious. Thus the keys to fun in these layers are balance (if one choice is much better than all the others, than it is not really a choice) and variation (if the choices are too similar, then choosing doesn't matter enough).

The second question to ask about the layers is: is a layer about short term or long term gameplay? Here we can see that the five layers I distinguished above are ordered based on this question. Combat is really short term: a fight takes around ten seconds and once you leave it and heal yourself, the next fight is fresh and separate. Long term tactics, however, is about the entire match, and thus about a timespan of 5 to 20 minutes. Finally, build experimentation requires trying different builds, and to really know whether a build is good or not, you should try it a couple of times. So this is about dozes of matches at least and thus about a period of many, many hours.

How does the prominence of the layer vary during the player's entire game experience? This is a more subtle layer property, but an example makes it quite clear: during his very first match, the player hardly knows the items and classes in the game, so build experimentation is not relevant at all yet. However, during this phase combat is the key to the fun, because this is experienced immediately and the player can enjoy the explosions right away. Asking this question for exploring new possibilities is interesting: at the start of the game, almost everything is new, so this one is very important. Then during the first 10 hours of gameplay, the player keeps getting new items and classes to explore. But after that, he has tried them all at least once and this layer all but disappears.

The final question I am going to ask the Oracle of the Lasagne today, is: how much work does it take to create each layer? This question isn't as exciting as the other ones, but I do find it interesting that combat is the layer where a very large part of the work for the art team happens, while build experimentation requires relatively few art, but requires insane amounts of game design work to get the balance right and to add enough variation.

There are many more questions that can be asked, but this post is already a wall of text as it is. To apply the lasagne theory to your own game, try identifying what layers the game has, what properties each layer has, and what you need to do to make that layer work for the player. Hopefully splitting up your game like this will yield some interesting insights!

As is the case with most theories about game design, my lasagne theory is just an analysis tool that can be used to understand your game better. There are many other game design theories and I think the best way to work with them, is to see them as lenses that can be used to give different perspectives on the strengths and weaknesses of a game. The lasagne theory is just one lens, and I hope it can help to understand and improve your own designs.
Posted by Joost van Dongen at 16:27