When I revealed our cancelled project Snowball Earth from 2008 in my blogpost earlier this week, I said that one of the problems that publishers had with the game and that kept them from wanting to fund it, was that the main characters were robots. Apparently it is difficult to reach a large audience with robots, and the fantastic Wall-E is a rare exception to that rule.

Although we had a clear vision for the game ourselves, we did not ignore this critique, and our art team (Martijn Thieme, Ralph Rademakers, Olivier Thijssen and Gijs Hermans) started making new concept art for the main characters. This was made after the main prototype was already finished, and was intended purely to show to publishers how the game could change to fit their marketing department's requirements better.

Especially the dogs came out pretty hilarious. They were replaced with real dogs, but those still needed to be able to roll around. Our artists came up with a (for the dogs) quite dizzying solution... 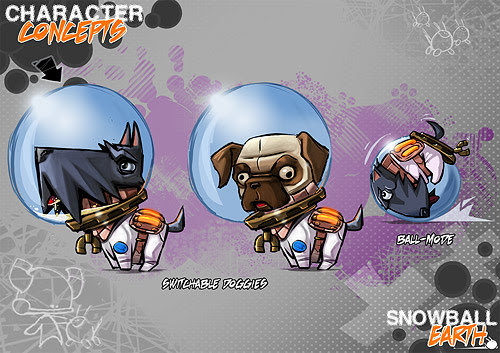 We didn't think it was necessary to make both the dogs and the player non-robots, so a number of alternative robot-dog designs were also made, to see if our art team could come up with something else that might appeal to publishers better. I personally especially like the bulldogs, which add a lot of cool and I imagine could have made for a nice upgrade later in the game. :) 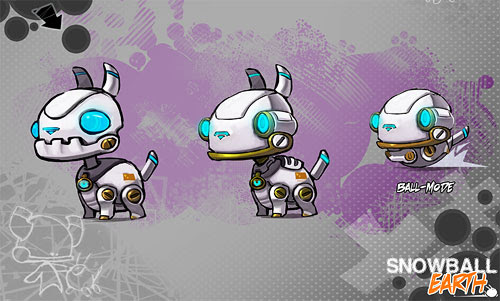 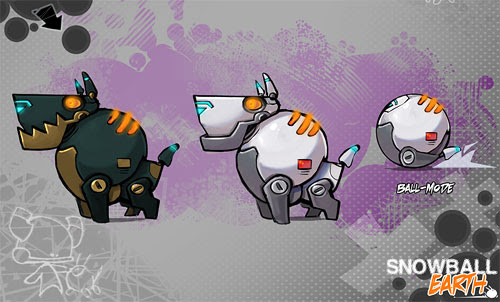 Speaking of robot dogs, this is the concept art of the original Robodogs, which are playable in the actual prototype: 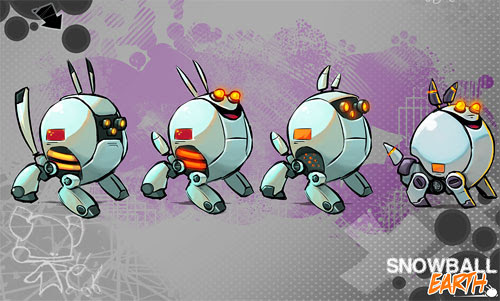 Now to the main character. A lot of redesigns were made. The common element here is that they all needed to have the magnet for pulling the dogs back, and some kind of heating device for melting the frozen world. May I especially draw you attention to the one with the teapot on top of his huge hat? The Ronimo art team seems to have a certain tendency towards that kind of awesome craziness... :)

What I find particularly interesting here is the lesson that our lead artist Gijs mentioned a while after drawing these. They all come in groups and they share a lot of common elements, like the suit or the shape of the head. Many are variations to the same ideas. This might be a fast way of working, but Gijs concluded afterwards that in a sense it also cripples creativity: working from a previous design limits the imagination to things close to that previous design. The better way of doing concept art, is to make most designs really different, and just start from scratch every time. This results in a much more diverse set of designs and ideas. It also doesn't even necessarily take more time: not all designs need to be shaded as detailed as these.

The final image I would like to share today, I was particularly delighted to come across in our archive. Publishers were unsure about how 'cool' the project was, exactly. Was this a kids game, or was this for teens and older? We felt it was a pretty 'cool' game and not particularly for small kids, so one of our artists made a number of alternative skins for the main character, which could be unlocked. Zombie Robot! Hot Rod Robot! Bumlebee even! Yeah! I really like the attitude in the skins and poses in this one! 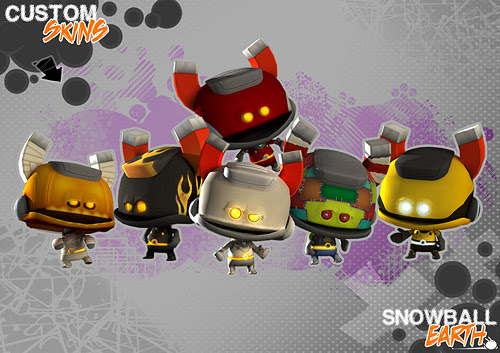 At the end of this concepting period, we chose the two below as the new characters. This was just before we cancelled the game, so they never made it into the prototype. The bulldogs because they were cooler ('more MTV'). The boy because we wanted to get rid of the giant head of our original robot hero. The big head was a problem with a relatively high camera, because the body was hardly visible beneath it.

Which makes me curious: which do you like better? Our original two robots, or these two? 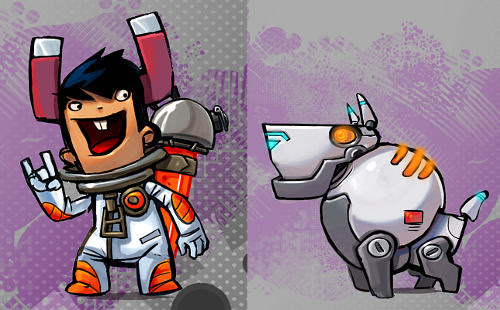 So these shots were made after pitching to publishers, which leads me to next week's topic: how does pitching to publishers actually work? Before we did our first pitches, I was incredibly curious to know, so I hope that will make for an interesting blogpost. See you next week! ^_^
Posted by Joost van Dongen at 18:00