Shining a light on how pitching to publishers works

When at Ronimo we released the prototype for our cancelled project Snowball Earth last week, I mentioned that we pitched it to tons of publishers. So what is that like, pitching to publishers?

In the past five years we did a lot of pitching for a lot of different projects. Despite that the pitches for Snowball Earth were not successful enough to land us a deal, we did get the hang of it enough to get some good deals going: we managed to sign Swords & Soldiers HD for PS3 with Sony, and we managed to sign Awesomenauts for XBLA and PS3 with DTP. We learned a lot from our contacts at publishers on how the process works, and today I would like to share that.

Before I start this story, please note that pitching can have many forms. For small distribution-only deals, things can be a lot simpler than this, and each publisher will have his own way of handling things. This text is my impression of how it works when you want to sign a larger title and want not just distribution, but also a serious development budget to be part of the deal.

The first step is what most people think of when they think of "pitching": a meeting with someone from a publisher, where you show your project and hope to get their interest. Most of these meetings happen at big events, like Gamescom and GDC. They usually last exactly half an hour, as the publisher is having meetings all day, every 30 minutes. The person at the publisher you talk to, is often called the "acquisition manager". Events like GDC are very exhaustive for him/her: seeing a new pitch every 30 minutes for three days, easily means listening to fifty pitches!

Getting an appointment for such a pitch is not very difficult. For our first pitches of Snowball Earth we just emailed a ton of publishers about a month before the event, and quite a few were willing to see what we got. If you want to meet one specific publisher, it can be difficult to get to the right person, but if you just mail a ton of publishers, then getting 10 to 20 different appointments at an event like Gamescom is quite doable. When we did our first pitches we hardly had any track record and we still managed to do around 15 pitches in only three days. 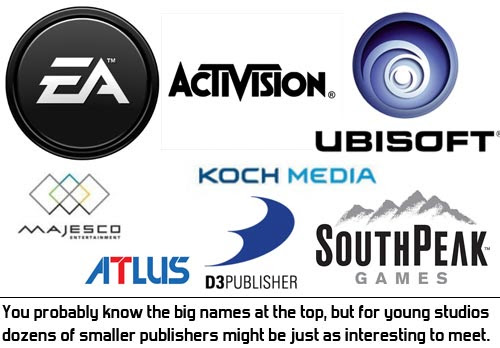 Note that arranging an appointment at the event itself is a lot more difficult, since most agendas will be full already. It is always possible to arrange a couple of extra meetings on the spot, though.

Many people claim that it is important to first check whether a publisher is doing stuff in your field, and of course it is, but this shouldn't be a restriction. Publishers are often shifting from one market to another and it is not always possible to know they are doing this. For example, when we pitched to DTP, they hardly had any presence in the console downloadable market, but they were apparently shifting in that direction and launched several such games in the years after we signed with them.

At a first pitch, you don't need a lot of details yet. You need to show the game and communicate why it is going to be awesome. Details are not important. A rough ballpark figure for the development budget and when the game would launch is enough at this point: details will be discussed later, and only if the publisher turns out to actually be interested in the game.

A common remark from publishers is that a pitch does not require a fancy playable prototypes. They claim to be interested in awesome concepts in their early stages as well. In our experience, this is only true for experienced studios. If you don't have a proven track record yet, then you need to compensate for that and having anything less than a really cool, playable demo makes it impossible to get a deal with anyone.

As I said, the publisher-person you pitch to is usually called an "acquisition manager". This person's role is a bit more complex than I realised beforehand. Of course, at first you just need to make him (since I never met a female acquisition manager, I will use "him" here instead of "her") enthusiastic about your game and interested in signing it. The acquisition manager is the gatekeeper: if you can't get him to like your game, then he won't show it internally to his colleagues and you definitely won't sign a deal.

However, the acquisition manager is not the person who can actually greenlight a project. For that, the game needs to be approved by several departments inside the publisher:

To sign a game, each of these departments need to agree that it is a good idea to do so. So just having a good game is not good enough. You really need to raise enthusiasm on a lot of fields outside the game itself to make it work.

Therefore, if the game is good enough that you can get beyond the first pitch, then it is key to provide the acquisition manager with all the info and material he needs to pitch the game internally. If you showed him a trailer during the pitch, then he will also need that trailer to show the game to his colleagues. Schedules, budgets, track record, prototypes, design documents, concept art, trailers: the acquisition manager is going to need all the good stuff to pitch the game internally, and as a developer you need to provide it to him.

We got deeply into this stage with Snowball Earth with a couple of publishers, and the first part of this trailer (which I posted two weeks ago) was made specifically to show their marketing departments what kind of vibe their advertisements could have. 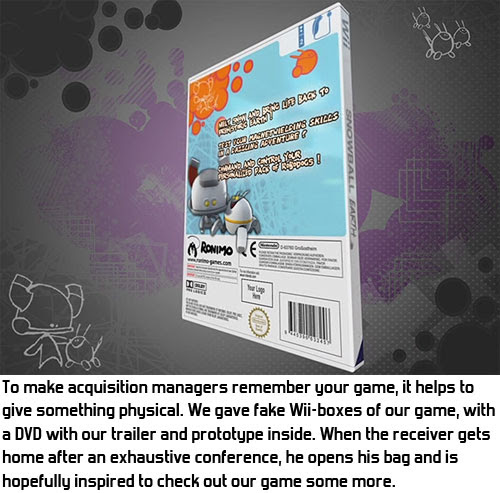 Having explained what departments need to greenlight the game, where did Snowball Earth fail? I think almost everywhere. Successful 3D platformers are a rare genre, so the sales department might not think the game is going to make enough money. Since the game had some innovative mechanics, it was even more difficult for them to estimate how it would sell. (This is a general trend we see in publishers: our games always have unique, innovative elements and publishers don't really understand those until the game is quite far along in production.) Marketing didn't know how to sell a game that was so split between more serious and more kiddy mechanics and graphics. And above all, the producers will have noted that at that point, no one in our team had ever released a full commercial game or touched a console devkit...

If all the steps above go right, the result is "greenlight": the publisher decides they want to sign the game! After this come negotiations for the rough deal, followed by the draft contract and negotiations about contract details. And then, finally: a signed deal, which will hopefully result in a good game and budget!
Posted by Joost van Dongen at 23:09