A couple of months ago I revealed my new project Cello Fortress. Now it is finally time for a proper trailer! Cello Fortress is a unique combination of a live cello concert and a game, and is intended to be played at events (festivals and such). This trailer shows how the game works, and shows a bit of the interaction between the players and the cellist.

Cello Fortress is pretty weird and unique, so I guess so far only those who actually played it, really understood what Cello Fortress is about. Hopefully this trailer will clear it up for others as well!

In essence, Cello Fortress is a twin stick shooter. Four players cooperate using Xbox controllers to destroy as many cannons as possible. However, the cannons are not controlled by the computer, but by a live cellist! He improvises live music on his cello, and tries to do that in such a way that the game not only does what he wants, but also that the music actually sounds good. In a sense, this is the ultimate in adaptive music!

The current version of Cello Fortress is still in beta and far from finished. The graphics are just some quick prototyping models thrown together, and all kinds of things still need tweaking and improving. Cello Fortress is already touring, though, and has so far played at several events in the Netherlands. 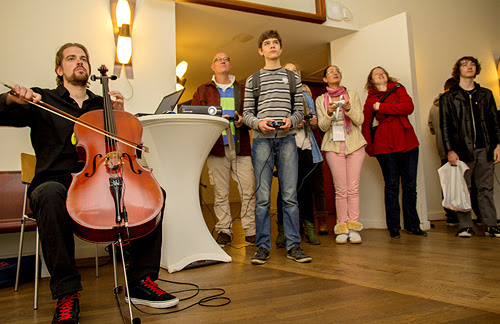 Cello Fortress is a complex project in several ways: playing cello so that it sounds good and controls the game is a big challenge and requires an experienced cellist and a lot of practice. Analysing what the cello plays is also technically very complex and has, as far as I know, never been done before in a computer game. I expect I can write a couple of interesting blogposts about sound analysis now...

Cello Fortress may be a music game, but it is nothing like existing music games like Guitar Hero. In Cello Fortress the instrument is a real cello, and real music is played. The cellist is also not scored for playing 'right' or 'wrong' notes. Instead, he controls a shooting game by improvising.

Because the music is so central to the game, I wanted to make sure that the trailer would sound like an actual match of Cello Fortress. In real matches, the music is completely improvised (nothing is composed beforehand), so I decided to also improvise the music for this trailer. I ended up recording over twenty improvisations, and I used the one that I liked most. (The timpani were added digitally afterwards to add a little bit of flavour for the trailer.)

I hope that this trailer will not just get attention in the world of games, but also in the world of music. Cello Fortress could be a revolution in music acts! This makes me quite nervous, though: musicians are bound to hear any mistakes in my playing. Cello is an incredibly difficult instrument to play well. Although it has been a hobby of mine for over twenty years, I can still only hope my playing sounds acceptable to trained ears... 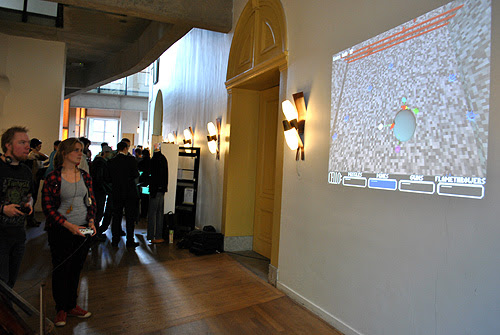 Since this music was improvised specifically for this trailer, it is not entirely the 'real thing'. Luckily, someone recently posted some footage of a match with audible sound (all other video recordings I have contain more audience noises than cello music). The video and sound quality are not super, but nevertheless this gives a good idea of what a Cello Fortress match sounds like:

Cello Fortress is a really weird and unique game, but for me it makes a lot of sense: playing cello has been a hobby of mine for ages, and I am a professional game developer. I like to make weird, unique things. How could these ingredients not combine into a game? Coming up with the actual concept for Cello Fortress was more difficult though: cello and computer can be combined in many different ways and it took me years to come up with something that is fun for the audience to play and watch, controllable by a cellist, and allows for beautiful music.

Cello Fortress is a project that I do entirely in my spare time. Nevertheless, I am going to steadily keep improving Cello Fortress, and I hope I can play with it at some exciting events and festivals!
Posted by Joost van Dongen at 21:59