Why Cello Fortress is a twin stick shooter

Cello Fortress could have been any kind of game. The core concept is nothing more than: "a game in which a live cellist controls the game by playing cello, and plays with or against the audience". This idea can be applied to any genre. The cello could control a brawler, a puzzler, a strategy game, a racing game, with some imagination maybe even a point and click adventure. So why did I specifically make a twin stick shooter? A lot of thinking and brainstorming went into this choice, so today I would like to explain that a bit.

Doing something with improvisation on my cello and my computer is a topic I have been thinking about for years, but it wasn't until a year or two ago that it dawned on me that the cello could actually be a game controller. Before that, I was mostly thinking about writing a procedural music generator that could accompany my own cello improvisations. Quite a big step from a game, but it slowly evolved into one from there nevertheless. Knowing that the game needed to be about a live performance with my cello, with or against the audience, creates a number of requirements for the game design. These requirements fuelled what would become the actual game, and it was quite a challenge to find something that really met them all well enough.


Each of these requirements brings a different view on what this game should be. Number 2 for example favours games with a zoomed out view, so that several players have room to move within the same screen. Splitscreen is also an option for this, but didn't seem such a good fit for readability in case of a larger audience where people might be standing further away. Specifically inspiring games for me where Gatling Gears by our Dutch friends at Vanguard, and the WiiWare racer Driift Mania. Both of these games are also excellent fits for requirement number 3, since they require very few sticks and buttons to control, which makes the gameplay easy enough to explain in just a couple of seconds.

Another game genre that came to mind was rhythm games. Dance mats are really nice controllers for festival-like situations, since they are so physical. However, this kind of game seemed at odds with requirement number 1: most rhythm games don't have an on-screen hero that onlookers can follow and root for.

Requirements numbers 4 and 5 are where the real complexity of the game design steps in. How does a cello control a game while still making music? For example, going left by playing high notes and going right by playing low notes is way too boring. I needed something more subtle. At the same time, the influence of the cello should be clear to the audience as quickly as possible, to make sure people don't think it is a 'normal' game with only a live soundtrack. The cello actually controls the game and ideally people would understand this without my explanation.

This makes the racing game a difficult proposition. I had in mind that the cello would generate the track. But to give players a chance at reacting to it, the track needs to build up a bit in front of the furthest player. This has the big downside that it happens just beyond where most people are looking.

I also struggled with how to build the track from the music. I thought about things like making difficult, spiky roads if the cello plays in minor, while generating more smoothly curving roads when playing in major. However, this is way too subtle. Most people probably can't even recognise the difference between major and minor well enough, let alone link it to the gameplay. In my mind I tinkered with lots of other ways in which the cello could control the game, but I didn't come up with anything that worked as well and as naturally as the current twin stick shooter. 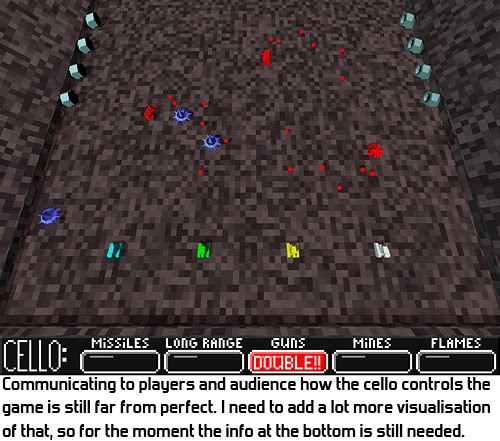 I arrived at the twin stick shooter as a good genre for Cello Fortress pretty early in the process, yet for a long time I kept brainstorming and looking further. This was because of requirement number 6. Twin stick shooters are a pretty overused genre in games, and it is difficult to still do something interesting with them in terms of gameplay. So I preferred something more original and kept searching.

However, in the end a quote from my former teacher JP van Seventer reminded me that keeping the core game less original might actually be a good thing. JP is a Wise Person (tm) and is also Ronimo's regular outside advisor. He currently works at the Dutch Game Garden to give advice to young Dutch game start-ups. He once said something along these lines:

"Innovating everything at the same time is not a good idea, because it alienates the audience too much. It is better to innovate on a number of aspects of the game, and keep the rest recognisable. That way players can relate to it much better and understand how it works more quickly."

This has been very influential on my thinking about games. Before this I had dreams of coming up with a game that would be totally unique in every possible way, and this quote made me realise that that might often not be a good idea. This quote definitely applies to Cello Fortress.

With Cello Fortress having been in the media quite a bit in the past week, I see now how difficult it is to explain what Cello Fortress is. Even after the very explanatory trailer that I posted last week, I read lots of confused comments online from people who don't really get how it works. So I am happy that I chose a genre in which the core gameplay itself at least is really easy to explain, so that I can focus my communications on the much more interesting side of the game: the way the cello controls it and the way the game is halfway between a game and a live performance.
Posted by Joost van Dongen at 21:22