The evolution of Sheriff Lonestar

Quite a few players asked to see more concept art of Awesomenauts, so who am I to not oblige to this request? This is actually a great excuse to talk a bit about the design process of Awesomenauts in general, by looking at how Sheriff Lonestar evolved during the three years it took us to create Awesomenauts. 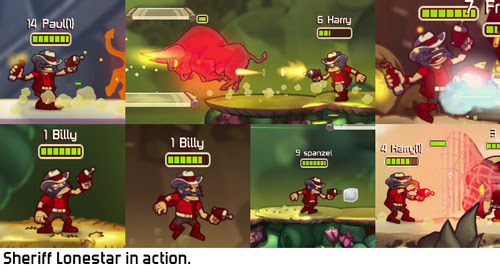 Before I get started, I should mention that today's post is mostly about the great work of my colleagues. I myself am lead programmer at Ronimo, so although I am involved in the design and art process, the real work is done by our designers (Fabian and Jasper) and our artists (in the early stages of the project as described here, those were only Ralph, Martijn, Olivier and Gijs). So all credit for the great work done on finding the right style for the gameplay and graphics should go to them! :)

In our first designs of Awesomenauts, there were going to be only three classes, but each of these three classes was going to have an extremely diverse set of skills. The final version of Awesomenauts still allows for great build diversity within each class, but in comparison to our first plans, it is quite limited. The initial idea was that each of the three classes had a lot of different skills, and the choice of which you bought determined how the class actually fought in battle. Later we let go of part of this idea: we increased the number of classes and made each class more focussed, since having only three classes felt like too small a number, while the complexity of allowing such insane build diversity within each class turned out unworkable for design and balance.

One of those initial classes was the Giant, which would later turn into Sheriff Lonestar. He was called the Giant because his most important skill was that he was able to grow really big. While big, he did a lot more damage and had a lot more health. I don't have a screenshot of the actual Giant playing, but below is what the game looked like at this point, really early during the prototyping phase. 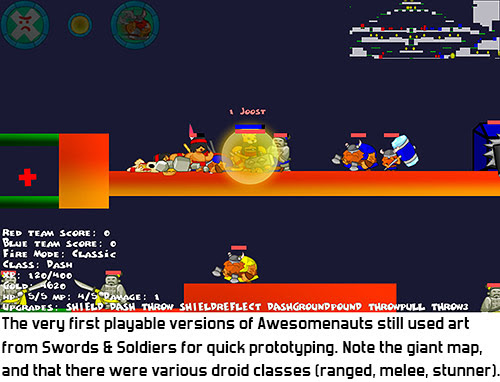 This screenshot dates back all the way to November 2009. Note that all the core elements of Awesomenauts were there already: classes, creeps, droids, turrets, lanes, a shop, upgrades, online multiplayer. The 'core' gameplay of a MOBA game is really big and we first focussed on getting that completely up and running.

I can't remember why we let go of the Grow skill, but at some point it turned into a skill that let you summon a big mech that would fight for you. The player could also mount the mech to steer it himself. The Giant was already evolving into the Sheriff at this point, as you can see in this drawing of the player controlling the spawned mech, which is starting to look a bit like a bull.

For some reason, however, this rideable mech never actually made it into gameplay. Probably because this would have been a relatively complex skill to code, and we needed to keep things simple enough to actually finish the game at some point. Just creating the mech and letting him run forward was way simpler, and made his use in the battlefield clearer: a storming ram that pushes away enemies and catches bullets. In the end, there was nothing "Giant" to him anymore, but he kept that name internally for a very long time, until his working title was changed to "Cowboy". 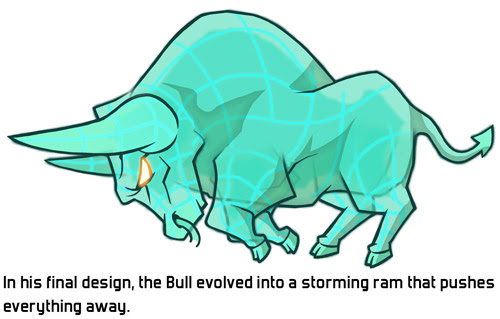 Now that we knew this character was going to be a cowboy, our art team could finally decide on his looks. They went through several iterations before they reached something they were happy with, as you can see here: 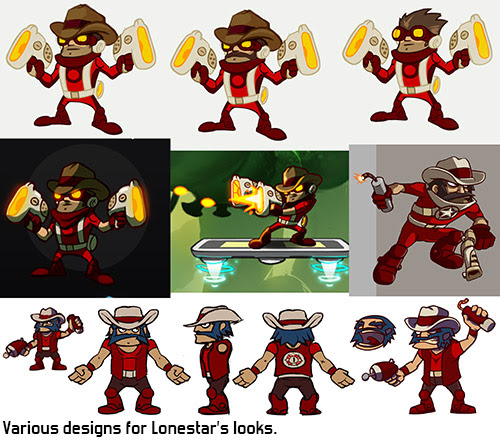 In the current Steam version of Awesomenauts, we also have DLC skins, turning Lonestar into something quite different. Knowing how long and slow the process of finding each character's initial design was, it almost surprises me how quickly our artists come up with alternative designs that are often quite different, but just as awesome as the original. This speed makes sense, of course: creating a variation on an existing design is much easier than creating a new design from scratch. 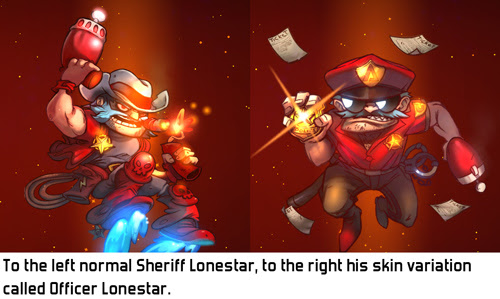 If you like to see more Awesomenauts concept art, you should definitely check out a couple of my earlier blogposts. In those I talked about what styles our artists came up with for Awesomenauts, what Awesomenauts almost looked like, and about the pre-visualisations our art team made of the final style.

Changing a hero who can grow into a giant, to a cowboy who summons holographic bulls, is quite a profound change. However, even bigger changes have been made during development of Awesomenauts. Next week I will explain the biggest change and most difficult design decision we made during development. See you then!
Posted by Joost van Dongen at 11:15