An important part of making a complex multiplayer game like Awesomenauts is optimising bandwidth usage. Without optimisations, just sending position updates for one character to one other player already costs 240 bytes per second (30 updates per second at 4 bytes each for both X and Y). And this is just a fraction of what we need to send: Awesomenauts can have up to 35 characters running around the game world, and we need to synchronise much more than just their positions. As you can see, bandwidth usage quickly spirals out of control, so we need to be smarter than just naively sending all the data all the time.

In the many months we spent on bandwidth optimisation, we employed lots of different techniques. The one I would like to talk about today can massively decrease bandwidth by crunching numbers on the level of individual bits. This technique not only worked great for the multiplayer implementation of Awesomenauts, but I am now also using this extensively for reducing the size of our replays.

Let's have a look at the core idea here. Storing one unsigned int normally costs 32 bits. In this we can store a value in the range of 0 to over 4 billion. However, we rarely need a range as big as that. For example, the amount of Solar you collect during an Awesomenauts match rarely goes over 5,000. In a really long match we might go past that, so let's bet on the safe side and say we want to store Solar values up to 10,000. This could be stored in 14 bits, since 2^14 = 16,384. That is less than half of the normal 32 bits used for a value like this!

Using too many bits is not a problem in memory since modern computers have plenty of that. But when sending the Solar over the network, we would like to use only those 14 bits we actually need. However, normally we can only handle data on a byte level, not on a bit level, so the best we can easily do is to store this in two bytes (16 bits).

What we need here to solve this is a bitstream, something that we can use to group together a lot of values on a bit-level. This way we can just grab a block of memory and push in all the values we want to send over the network. The idea is quite straightforward, so let's jump right in and have a look at how one could use that:


The details of actually implementing the bitstreams itself is too much for this blogpost, so I will leave that as a fun exercise for the reader. Hint: you can use bitwise operators like |, ‹‹, &.

When looking at this code there are a number of observations to make. First is that I am actually using only 31 bits while storing them in 4 bytes. In other words: I am wasting 1 bit here! This is something that almost always happens when using bits: at some point they need to turn into bytes, since that is what network packets are measured in, and we usually waste a couple of bits there. This loss can be decreased by using larger bitstreams with many more values in them.

A much more important realisation here is how easy it is to break this code. If I read back the solar with the wrong number of bits, then not only will the solar be complete garbage, but also all values after it. The same happens if I accidentally read back values in the wrong order, or forget to read one. The compiler will not warn you of any of these things and debugging on a bit-level is difficult, so this produces extremely stubborn bugs! Another easy mistake is to use too few bytes for the data, resulting in buffer overflows and thus memory corruption, or to use too many bytes, resulting in wasting bandwidth. In short: use bitstreams only when you really need them and be extremely careful around them!

So far we have only stored the easy kinds of data: bools and unsigned ints translate very easily to bits. However, many things in a game are floats. When using an unsigned int, taking just its first 10 bits results in a valid number, just with a smaller range. But with a float taking those same 10 bits results in nonsense. How can we send floats with arbitrary numbers of bits?

The trick here is rather simple. A float has a number of properties that we usually don't need. Floats have very high precision near 0, but when storing a position, we want the same precision everywhere. Floats also have an extremely large range, but for that same position we already know the size of the world and we don't need to be able to store values outside that range.

Knowing these things we can store positions (and most other floats) in a different way. Levels in Awesomenauts happen to all be in the range -10.0 to 30.0. Knowing this we can just store the x-position as an unsigned int with an arbitrary number of bits. If we want to store a position in 8 bits, then the lowest value (0) means position -10.0, and the highest value (255) means position 30.0. Values in between are just interpolated. This is a simple and very effective trick. Depending on how much precision we need, we can use more or less bits.

When synching over the network we actually don't need all that much precision, since the receiver is not using the position for a physics simulation. He mostly just uses it for visualisation and checking whether a bullet hits. So in Awesomenauts we use 13 bits for synching the x-position and another 13 bits for the y-position, which is a lot less than the normal 32 bits each would need as a float!

The same idea can be applied to many other things that are also floats and for which we know the range. Some things even need extremely little precision. For example, the health of other players is only visualised in their healthbar, so we only need to synch as many bits of that as are needed to make the healthbar look correct. Since healthbars are usually in the order of 100 pixels wide, we can store health in 7 bits, even if the actual range of the health might be 0.0 to 2000.0. With 7 bits our for that range would be only 15.625, but more isn't needed because the difference is not visible in the healthbar anyway. The simulation is not influenced at all by this, since the owner of the character still stores the full precision float for the health. 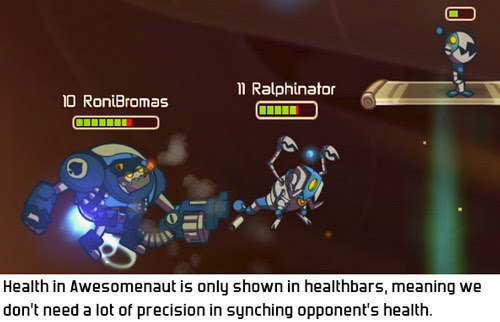 Using tricks like these we managed to get the bandwidth usage of Awesomenauts down to around 16 kilobyte per second. This is the total upload needed at the player who manages bots and turrets. The five other players in a match don't manage those bots and turrets, so they use far less bandwidth still. For comparison: our very first network implementation in the Awesomenauts prototype we had four years ago used around 50x (!) more bandwidth. Bit-crunching numbers as explained in this blogpost is just one of the many tricks we used to decrease bandwidth, but it was definitely one of the strongest!
Posted by Joost van Dongen at 11:15