For the extended soundtrack of Proun+ I am composing a series of short sketches for grooves for the new songs. I already posted seven of them a couple of weeks ago and today I present the final six. From here on I will select the best ones and start turning them into real songs. I would love to hear your opinions on these, since that will help us choose which to expand on.

Keep in mind that these are quick digital sketches. The final soundtrack will be played entirely by live instruments and produced by professional musician Arno Landsbergen, so they will sound much better just because of the real instruments and good production.

The one below is pretty different from the rest. Arno and I wrote "Groove Sketch L" together and Arno recorded it live. This means that the sound is much better right away, making a comparison to the rest difficult. It also shows that everything is better on a real Hammond organ: what an awesome sound these things have! The Mellotron halfway (starting at 0:25) was added later by Arno and I love it, because it is impossible to not love Mellotrons.

The final piece below is in a much further state already and created entirely by Arno. "Chaingang Rag Dressed Up For Warp Speed" is a song Arno started writing a couple of years ago around the time of the launch of the original Proun, but he never finished it for the actual game. I absolutely love it so we have already decided that Arno will expand this one into a complete song for Proun+.

Working at these sketches is a very interesting process and a personal breakthrough for me. I am a completionist: whenever I start working on something, I want to actually finish it. For some things this is good: Proun would never have existed if I didn't feel like I had to finish it for six years. However, being a completionist also has a big downside: instead of making dozens of prototypes and little ideas, I mostly just create bigger stuff. For example, in the past 1.5 years I worked in my spare time on just this one project called Cello Fortress, ignoring all other ideas I have. I love Cello Fortress, but it would also be nice to try some of the dozens of other concepts that linger in my head.

Being a completionist also influences my gaming habits: I have to finish almost any game I start and thus play few games. As a game developer it would be much better if I played and experienced a lot of different things a bit, instead of only selecting those games I will actually finish.

Knowing that I am such a completionist makes me scared to start working on something new, regardless of whether it is a game or a piece of music or 3D artwork. I won't be able to happily drop it until it is finished, and I will feel bad if I don't finish it. In fact, I still plan on finishing my 3D design for a baroque villa, despite that it has been on hold since 2004. Twothousandandfour! That is a ten years old project that still lingers in the back of my mind because I feel bad for not completing it. 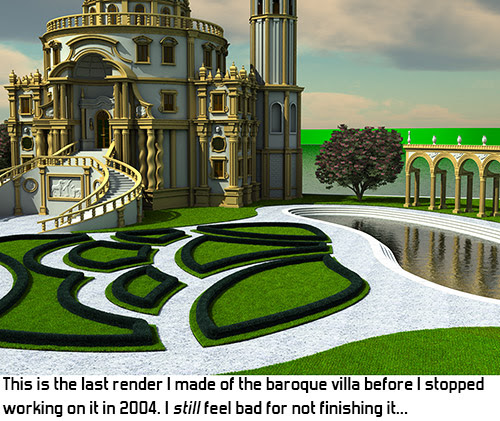 Not being able to sketch or prototype stifles creativity, so I am glad that for the music for Proun+ I managed to find a compromise that fixes most of my completionist problem. The 'project' I defined here is to make a long series of simple ideas. Each is an incomplete thing, but to me as whole they form a completed group of sketches.

Turning a group of unfinished things into a project that can be finished as a whole satisfies my urge for completing things, so that I won't feel bad for the unfinished pieces.

Back to these groove sketches for Proun+: which do you like most? Any you really dislike?
Posted by Joost van Dongen at 10:02