So much awesome news in the week Ronimo turns 7!

Today Ronimo Games turns 7. Seven years old already, it definitely doesn't feel like we have been around for so long already! This week was also marked by the biggest amount of awesome news in a single week so far, so let's have a look.

Most importantly, we announced our new game: Swords & Soldiers II for WiiU. This game has been in the works since November 2011, so it is good to finally reveal it. Right now we are not discussing any specifics yet: more information will come at GDC in a couple of weeks, where press will be able to play it. What I can say right now is that I think the game looks incredible and I am really stunned at the quality of the graphics and animations that our art team has been creating.

It is pretty incredible to read online that the original Swords & Soldiers has so many people who remember it fondly. These are just some of the heart-warming quotes I saw in the comments beneath news articles about the sequel:

-"Hp hip hooray. One of my all time favorite games finally getting a sequel. Can't wait."
-"Ooh, nice! The original was great!"
-"Love it. LOVE IT."
-"Got up, read this = instantly made my day :D Awesome, The original is one of my all time favourite WiiWare titles."
-"Swords and Soldiers was the most underrated wii ware game. This is great news."
-"the original title was one of the WiiWare's hidden gems"

We thought the Kickstarter backers of Awesomenauts Starstorm might have some questions about how this relates to Starstorm, so we put up a public statement explaining how long Swords & Soldiers II has been in development and how we have been growing the team to 21 people to make both projects happen simultaneously. In fact, two new programmers will be starting next Monday! This is also a new challenge for me personally: the Ronimo coding team will now be 7 people and I have never been lead programmer to so many people at once. I am looking forward to this new experience! 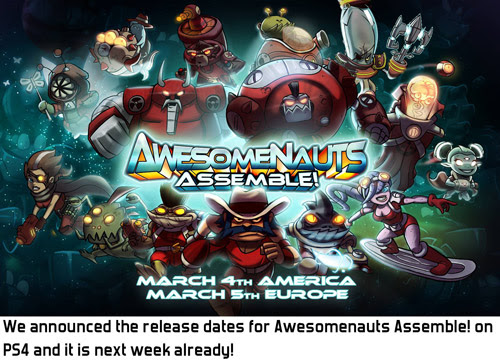 Another big announcement is that we finally have a release date for Awesomenauts Assemble on PS4! It took a while to get all the bugs ironed out, but Abstraction Games made a great port and we are really looking forward to playing next-gen Awesomenauts. 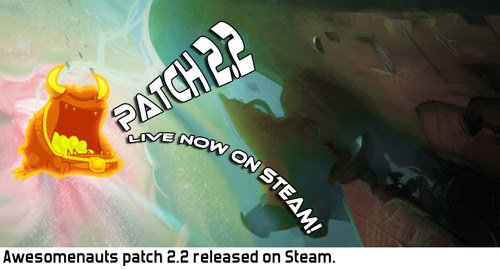 This week we also released patch 2.2 for Awesomenauts on Steam. This is a smaller in-between patch that mostly fixes a lot of bugs and improves the balance. It contains one bug-fix that we have been looking for for ages: the infamous sliding bug should be gone now. This was a complex synchronisation bug that is interesting enough that I will be writing a separate blogpost about it soon to discuss the cause and the solutions we tried.

Patch 2.2 also added collecting of anonymous gameplay metrics, so we now have a much better view of how people play the game and how characters and individual items are balanced. For example, we can now actually see how many people play splitscreen, or Custom Games or Baby Kuri Mammoth. 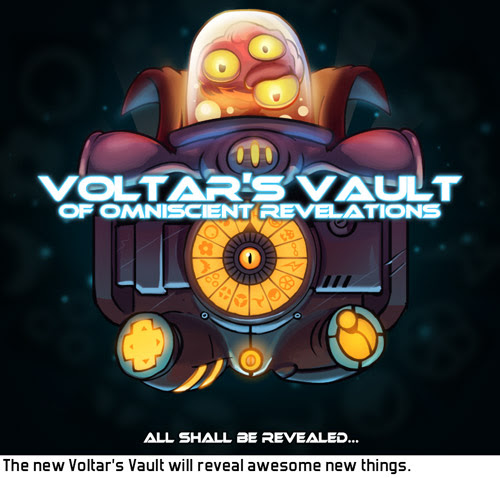 Together with patch 2.2 we also revealed Voltar's Vault. Voltar's Vault is a device that we use to overheat and cook player's brains with anticipation for the awesome new things coming to Awesomenauts. Deliciously cooked brains, they taste so good! 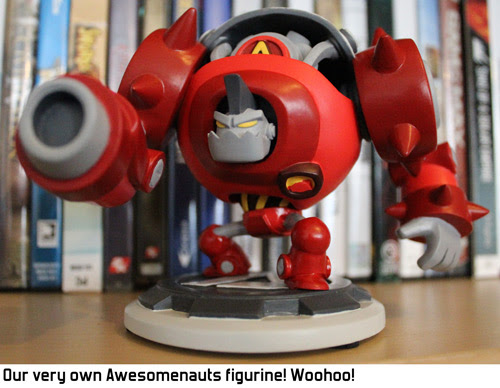 The final bit of news is that the Clunk figurines finally arrived in our office. They turned out much slicker and bigger than I had expected when we started work on this. Very cool! European pre-orderers should mostly have received them by now, while Kickstarter backers and American pre-orderers will have to wait a while longer until they have been shipped to them. This whole process of shipping and physical production is new to us and we are trying to have them delivered to everyone as soon as we can. You can order one these brutal robots over here.

A wise man once said that the final goal of any game developer is to have action figures of his games. Seems like I am ready for retirement now!
Posted by Joost van Dongen at 11:37