Why free to play games are inherently less fun

Designing a free to play game with microtransactions is a huge challenge. It is incredibly difficult to find the perfect balance between giving players a strong incentive to pay something while still making the free experience good enough that they keep playing. This challenge is crippling to the game itself. It is impossible to make a game as fun as it could be for both paying and non-paying players. At least one of those groups gets a game that is less fun.

Game design is all about making a certain concept as much fun as possible. By tweaking things like difficulty, flow, reward systems, variation and complexity the game designer tries to create the best experience possible. This "best experience" is an invisible target: you can never know whether you have reached it, or whether tweaking some things would make the game slightly better. It is also something that differs depending on the target audience. Some players like a challenge, others like a more relaxed experience. Some players want to drown all their time in a virtual world, others want a short and condensed experience.

The amount of "fun" in a game can be envisioned as a graph. Design the game in a certain way and you are at the very top of the graph, at the most fun experience. During development you try to tweak the game to get closer and closer to that very top, to that ultimate game. This is of course a theoretical graph: you can never know exactly how it runs. Also, there are many peaks, for the many different game concepts possible and for many different target audiences.

When designing a free to play game, the game designer looks for the best experience, just like when designing a 'normal' paid game. However, when designing for free to play the game designer needs to juggle two balls: some players pay money, others do not, and both groups need to get a good game. Especially the progress and reward structures in the game become very different for paying players. Non-paying players usually get very slow progress, while if you pay you immediately jump ahead. For example, in The Simpsons: Tapped Out you can wait many hours for a building to complete, or pay some real money to have it finished immediately.

Designing a good progress and reward structure is very important for most games. A good RPG usually becomes much less fun if you unlock new skills at half the speed, since it becomes too much of a slow grind. Unlocking things twice as fast does not make a good RPG better either: the player will feel less satisfaction when getting something new, will care less about each new item and might not even try a lot of them because they unlock so quickly. More rewards is not automatically better. There is a perfect rate of progress: not too fast, not too slow.

This argument is not just valid for reward structures. It also works for all other aspects of the game: whenever gameplay is sold with real money, it is impossible to make that gameplay perfect for both non-paying and paying players.

This means that the average free to play game is full of things that try to push the player away from doing what he wants to do, pushing the player towards paying real money. This can again be seen in an example from The Simpsons: Tapped Out: when you try to build something with in-game currency, the game often first lists all the items that you can only build with real money. You need to scroll through long lists of things you cannot build, until you get to the things that you can. In a 'normal' game, the game designer would design these menus to help you find what you want to build as quickly as possible. Here the game does the very opposite because it needs to tease you with all these items that it wants you to pay real money for.

Of course the player needs to pay for paid games as well, but in a paid game she pays up front, outside the game. After that the game tries to give here the best experience it can, instead of all the time trying to sell her something. 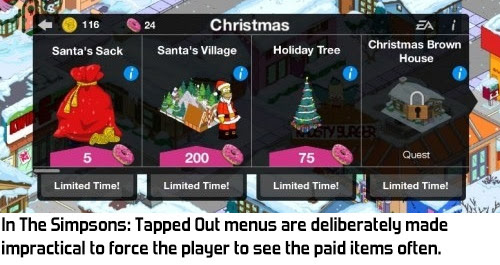 Despite these problems free to play can still sometimes be a good idea. Especially multiplayer games can sometimes benefit greatly from free to play. This is because multiplayer games automatically become more fun when more people play them. The more players there are, the better the game can match players of similar skill to play together. The more players, the better lag can be reduced by matching those who are geographically close to each other and the higher the chance that your friends are also playing so you can play together with friends instead of strangers. With more players the game can also offer more game modes while still making sure everyone immediately finds opponents to play with.

In short: multiplayer games are better when more people play them. Free to play generally draws a larger crowd and thus often improves the game. So despite that the free to play model damages the game itself, the improvement from having more players might mean that the total effect of free to play can be a plus to such games. 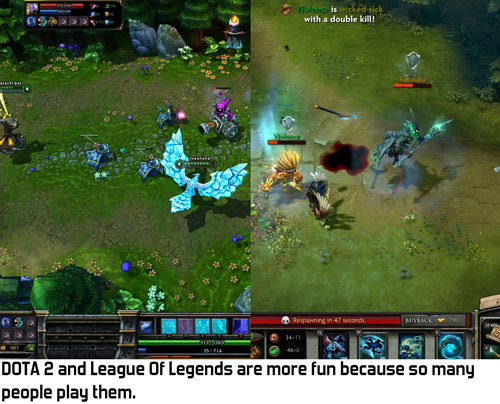 Free to play and microtransactions are also sometimes needed purely from a business perspective. In some game genres and on some platforms players are so used to free to play that many simply refuse to pay upfront for a good game, even if it is a better game. In that case free to play might be the only way to make a successful game. Another business reason to include microtransactions might be that support, running servers and developing patches are all expensive to do. The developer might simply need the additional income from microtransactions to be able to keep supporting the game after launch.

Free to play games are inherently less fun because paying and non-paying players cannot both get the best possible experience, and because making money purely through microtransactions requires constantly pushing the player towards doing something she does not want to do. In case of multiplayer games having more players might add more fun than is lost due to free to play, but that doesn't change the fact that designing a game around microtransactions always damages some of the fun.
Posted by Joost van Dongen at 21:22