Proun cloning controversy: why indies should complain less about clones

My game Proun was recently 'cloned' by an iOS game called Unpossible. Unpossible isn't the first 'clone' of Proun: games like Synesthetic and Polyrider also copy the core gameplay and many obstacle shapes. Polyrider even goes so far as to copy-paste my main marketing text (DOH!). However, the timing of Unpossible is much more painful as Proun itself is also finally coming to iOS (and Android and 3DS): together with Engine Software I am working on a bigger and better Proun+. Proun+ coming to iOS means that it will be a direct competitor of its alleged clone Unpossible. I saw quite a bit of controversy online about whether Unpossible is a clone or not and whether that would be bad or not, so here is my own take on the matter.

I think most people are worrying way too much about most clones. The only clones that should be considered a big problem are direct rips that add nothing and are clearly only intended as a moneygrab. Most infamous clones are not of this type and indie developers should complain less and instead spend that time making more and better games.

One aspect that seems completely absent from how indie developers react to clones is pride. Usually your game will only be cloned if you make something very good and different from what already exists. Somehow most indies seem to only notice the negative and don't realise what a fantastic compliment being cloned really is. One of the things I am most proud of in my game development career so far is that Swords & Soldiers and Proun have both been 'cloned' many times and that De Blob has directly inspired other games. Indies should focus more on this positive side of cloning! 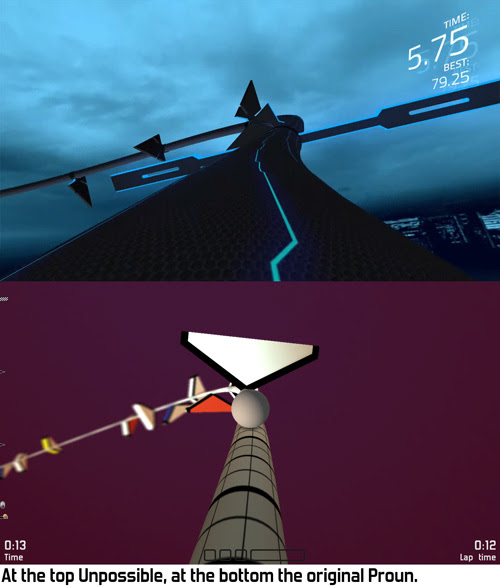 I think there are three types of clones:

-The "Asset Ripper" is the worst. These are clones that not just copy game mechanics, but even go so far as to rip assets directly from a game. Graphics, sounds, animations: they are just copied directly. We have actually encountered these ourselves once: a Swords & Soldiers clone had used some of our sound effects in their game. However, this was a small Flash game that was played by hardly anyone so we ignored it and didn't take any action. The "Asset Ripper" is the only type of clone that is definitely illegal, since it violates copyright laws.

-The "Art Replacer" is the next step: practically all game mechanics are copied directly and the only things that are changed are the visuals and audio. This is still clearly a clone, but we are already entering a grey area here. If the visuals are changed from a happy fairytale to gritty sci-fi, then the feel of the game itself also changes a lot. It is still lame to copy mechanics directly like that, but this isn't a complete clone anymore and might cater to a different audience. A famous example in this category is Yeti Town, which ripped Triple Town. They switched to a different setting, but the happy feel remained the same. Add that to a literal copying of every game mechanic and rule in Triple Town and it becomes extremely lame.

-Finally there's the "Mild Changer". This is the category Unpossible belongs to, as do famous 'clones' like Ninja Fishing. Mild Changers have a lot of similarities to another game, but add not just their own visuals: they also change the gameplay in some small ways. The core game keeps feeling the same, which is why people cry 'foul' so often for these kinds of games, but they do change things and thus create something new.

Unpossible is a clear example of this latter group. At first glance this game seems to play exactly like Proun, but it does change some things. The camera goes from third person to first person. This doesn't really make the game feel very different, but it is a real change nevertheless. The cable is thicker in Unpossible, so it is more difficult to see what is coming around bends and what is at the other side of the cable. And most importantly: in Unpossible the game immediately restarts when you hit something, while in Proun you can keep racing. This changes the game quite a bit.

I think developers should complain much less about such "Mild Changers". Genres evolve by copying from existing games and improving and adding to that. This is how we as an industry grow and discover new places. Truly new things are hardly ever made without grabbing lots of elements from existing things, in games as in most other subjects. Classic RTS Dune II lacked group control and regrowing fog of war. It is a good thing that other games 'cloned' Dune II and added these crucial elements, bringing the genre forward. A clone that is significantly better than the original is a great evolution and should not be frowned upon. (Not that I feel Unpossible is significantly better than Proun, but it still is an evolution.)

Strangely, if a game is part of a genre with lots of existing games, it is considered okay to only change some small things. But if a type of game has so few games that it can hardly be called a genre yet, then suddenly it is cloning and considered problematic. It seems like the general public thinks 'clones' are a problem if few games do it, but if lots of games all do it for years, then we call it a 'genre' and it is okay.

An interesting question in such cases is whether the developer of a clone knew the original at all. On the Touch Arcade forums Acceleroto claims to not have know Proun until Unpossible was already playable: "I didn't know about Proun until I shared an Unpossible build with some dev friends." My first inclination is to believe him: when I started working on Proun I also didn't know about F-Zero's Cylinder Wave track. (In case anyone is wondering about 2009's Boost 3D: Proun's first versions are way older than that, as can be seen in this forumpost from 2006.) Despite Acceleroto claiming to not have known Proun, when I actually played Unpossible I started to strongly doubt that. The similarities in types of obstacles and game feel are so incredibly strong that I really doubt whether Acceleroto really didn't play Proun until most of Unpossible was designed, especially considering how 'original' his other games are.

At Ronimo we are currently developing Swords & Soldiers II. Do I worry about the many similar games and even clones out there? No, I don't. We are trying to make Swords & Soldiers II better and more fun than the others. If we succeed at that, then the clones won't hurt us. If we don't succeed at that, then we should have made a better game and have only ourselves to blame. Ridiculous Fishing is a great example of this: Vlambeer made their sequel to Radical Fishing so incredibly good that it became a gigantic hit despite so-called 'clone' Ninja Fishing launching much earlier. 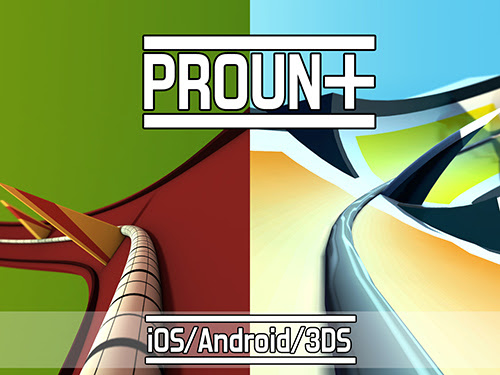 Another part of handling clones is that indies should simply make better business decisions. Unpossible will compete with Proun+ on iOS, but this is entirely my own fault: Proun has been out for three years now so I should have jumped on iOS ages ago. Had I done that, then Proun+ would have released well before Unpossible and the whole issue would not exist. This is a situation that often arises around clones: the original developer is very slow at bringing his game to other platforms and when he finally does, he complains that clones have sprouted in the meanwhile. This is especially important with games that are simple to build, like Proun. Ronimo's Awesomenauts and my own Cello Fortress are technically so complex that clones are much less likely to come quickly, if at all.

Before we learned of Unpossible we were already adding more variation and originality to Proun+ by introducing new game modes, more music and new visual styles. Seeing Unpossible can only strengthen our resolve to make the best game we can. If we fail at making a better game, then that is entirely our own fault. If we succeed, then I doubt the existence of so-called 'clones' will be all that relevant to sales of Proun+.
Posted by Joost van Dongen at 08:33