Luck and success in the indie business

Luck is an important part in the success or failure of any game studio. Why do some studios succeed while so many others never make a significant amount of money? Regardless of how good your theories are on what makes a successful business, you can never know for sure which games are going to be a hit. Games are entertainment and hit-driven and thus their success is inherently unpredictable. Luck cannot be controlled, but you can help it a bit by making the right choices. Looking at what many starting indies are doing right now, I think a lot of them don't think about luck enough. Here are some of my thoughts on the matter.

The success of a game is determined pretty much equally by three factors: the game, marketing and luck. Marketing and luck are just as important as the game you are making. If you do not market your game, then no one will know it and thus only a LOT of luck can make it a success. Similarly, if your game is not good enough, then it is also very unlikely to sell well. 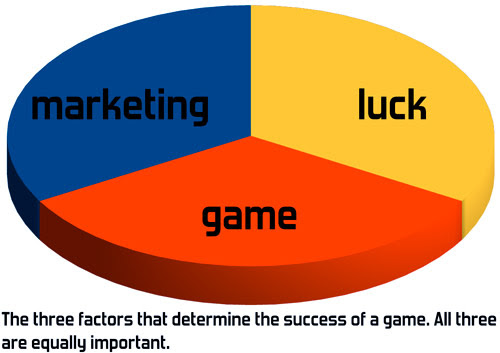 While luck cannot be controlled, you can make such decisions that you need as little luck as possible. If you make an awesome game, do really good marketing and release it on the right platforms, then your chances are actually pretty good. But luck always remains a factor. Even the very best games can sometimes fail, and even the worst games sometimes become a hit. Anyone remember Psychonauts? It is considered a classic now, but sold hardly any copies at the time. On the other hand Flappy Bird was an enormous success, despite how crappy that game actually is.

When making your business decisions it is of course a good idea to look at what other companies are doing. What games sell, and why? However, it is a big mistake to attach too much importance to the outliers. Lots of people look at Minecraft and try to copy what it did, hoping to achieve similar success. But Minecraft is a one-in-a-million outlier. Of course Minecraft has some great mechanics, but it also required an enormous amount of luck to become that successful. The chances that you can achieve something even remotely similar are practically zero.

The same goes for Angry Birds and Candy Crush. It is not because of great talent that these games became such huge successes: they are well-made for sure, but there are tons of other games of similar type and quality that somehow did not become such hits. Before Angry Birds and Candy Crush became a success, there was no way anyone could have guessed that these would be the titles to become such big hits.

A strategy some studios use is to not make one big game, but instead make lots of small games and then hope one of those becomes as successful as Angry Birds. The reasoning behind this strategy seems to make sense: every game you release is a roll of the dice. Releasing more games gets you more rolls of the dice, increasing your chance at success.

I do not believe this really works. I think a single really good game has a much bigger chance at becoming a success than dozens of lesser games combined. Of course it is impossible to prove a theory like this, but I believe that a better game has an enormously larger chance of becoming a hit. If you can raise your game's quality from a 7 to an 8, or from an 8 to a 9, then you stand a much, much, much better chance. If you can somehow make a game that scores a 9.5 on Metacritic, then you can be almost certain it will sell like crazy. Even then you can never be sure though!

For this same reason I also do not believe in the 'fail early' strategy that some companies use, especially in combination with Early Access or free to play. The idea of 'fail early' is to release your game when it is only half of what it could be, and then see how well it does. If it does well, then you continue development and make it better. Otherwise you just drop the game and make something else. Like above, this allows a company to make more games and thus get more rolls of the dice. I do not believe that this works: the chance of the game becoming a success is infinitely better if the game itself is much better. That game that is dropped because the half-finished version did not sell well might have become a hit if it were actually developed into a good game, instead of a buggy or too small one.

(Note that I do think Early Access and soft launches can sometimes work, but for other reasons: they provide tons of testing and user feedback and it might also help fund the rest of development.)

'Chance' is also why big publishers can be relatively stable over time: they release a lot of big games, so the chance of them all failing is really small. This is the benefit of size, and it is a benefit that indie companies generally cannot have.

A good way to get more rolls of the dice is porting. If your game failed on one platform, it might still do really well on another, especially if that other platform has a different audience.

We have experienced this ourselves: Swords & Soldiers was a hit on WiiWare back in 2009. A year later we released an HD version of the game on Playstation 3, with added online multiplayer, but this sold very poorly. Then we released the game on Steam, and there it again sold really well. In hindsight one can come up with theories on why it failed on Playstation 3, but beforehand we had no idea. Every port is a new roll of the dice. Ports are much cheaper and faster to develop than completely new games, so porting is in general a good idea. 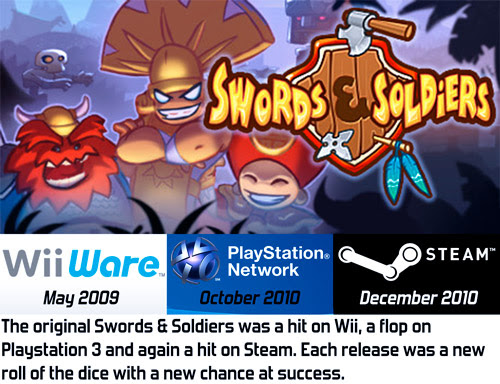 Luck cannot be controlled, but you can influence it. I would like to finish this blogpost with a great example of this: our own Awesomenauts. Awesomenauts is a big hit with around two million copies sold. Its success is partially due to its excellent release timing, which was pure luck.

Awesomenauts is a complex game to communicate. During the three years it took us to make the game, League of Legends appeared and became a gigantic hit. Suddenly our marketing became really simple: Awesomenauts is platforming League of Legends! This is a message everyone understood and that immediately had people intrigued with this interesting combination of elements. This helped our sales enormously.

There is no way we could have planned for this: the game took three years to develop so at the beginning we had no idea what would happen in the meanwhile. This might make one think that the success of Awesomenauts was all luck no skill, but this not the case at all. More like the opposite! Awesomenauts has a unique concept, is large for an indie game and is high quality. We spent a lot of time on marketing and have so far released the game on four different platforms, giving us four rolls of the dice. All of these combined mean that our chances were pretty good to begin with. Still the game could have failed, and luck was the final push that we needed.

There are two ways to improve your luck: get more rolls of the dice by having more releases, or improve the chance of each roll by having better releases. I personally think each release should be the best possible, by making a remarkable game with good marketing, a fitting payment model and on the right platforms. You can also handle luck by finding an investor who is willing to invest enough to make several games, so that you get more rolls of the dice. There are many possible approaches and it is important to think about luck and make sure your chances are as good as possible.

This is the first post in a short series on the state of the indie business. Part 2 is more controversial and will hopefully stir up some discussion, as it is about what I think many indies are doing wrong.
Posted by Joost van Dongen at 13:36