The downsides of gameplay variety

An important goal in the game design of Swords & Soldiers, Awesomenauts and Swords & Soldiers II is gameplay variety. We try to make all the classes, units and factions play and feel as differently is possible. This makes it more fun to try them all and allows for much more interesting and varied tactics than if everything feels the same. It seems quite obvious that a game gets better if more diversity is added, as long as you have the budget to do so and it does not take away from the core vision. However, there are some serious downsides that are not as obvious. Adding more diversity can hurt many different aspects of a game, as I will explain in this blogpost.

When striving for variety it is important to be aware of the trade-offs. It does not mean that you should avoid diverse mechanics, far from it: it is a key element of the games we make at Ronimo! But consider the consequences before blindly adding variety.

A great example of such trade-offs can be found in the movement mechanics of Awesomenauts. We try to make every character feel different, not only their combat skills, but also their basic movement. Some characters can jump, others can fly, float, make little hops in the air or double jump. There is also variation in walking speed, acceleration and sliding time. Not all of the 21 characters we have so far are completely unique in their movement, but there certainly is a lot of variety. As the interplay between the different classes in Awesomenauts is a key part of the game, this diversity is really important to us.

So where is the trade-off? The problem is that there is such a thing as the ultimate jump. If a jump has the right duration, height and speed, it just feels excellent. Make it a little bit faster or slower and it is instantly less glorious. The jumps in the old Mario games are a great example of this. They strike a perfect balance and it feels awesome just to hop around.

This is where variety bumps its beautiful head. If every jump is to feel different, they cannot all hit that sweet spot. They can feel good in their own way, but it is practically impossible to make them all feel equally super. My colleague Fabian Akker, currently lead game designer on Awesomenauts, recently voiced this very clearly during an internal meeting: "Yes I can make this character faster and yes he will play better then, but I can't make them all be Mario because they will all feel the same." Adding variety will often make the individual parts feel slightly less good than possible, because there is only one "best thing in the game" and not everything can be that thing.

Another example where movement diversity can hurt a game is in graphics. In early prototypes of Awesomenauts we had a skill to walk on ceilings and another to walk on walls. For various reasons both were removed, and one of those reasons was how limiting this would have been to the graphics. To communicate clearly where the player can walk, floors need to be mostly straight and clear. If characters can also walk on ceilings and walls, they would have to be straight and clear too. That would have been a huge limitation to our art style! In this case adding diversity to the gameplay would have removed diversity from the graphics because of the restrictions imposed by the necessities of walkable surfaces. 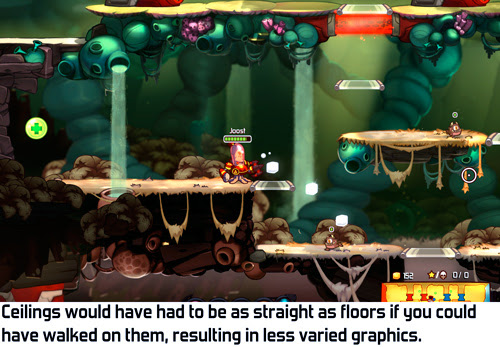 Diversity is also a problem for balance. The easiest way to make a game perfectly balanced is to have but a single character. Boring, but definitely 'balanced'. As soon as you add more characters, balance quickly becomes infinitely complex and often practically impossible to achieve perfectly. In a previous blogpost I discussed how there are many sides to balance. Even if you manage making all the characters equally strong for pro players, they might still be imbalanced for beginners, in specific team compositions, or in some other way.

A great example of this can be found in map design. It is fun to have a bunch of maps that all play differently. But even the smallest difference can cause problems. If one map is larger than the rest, slow characters will be at a disadvantage. You might try to solve this by giving slow heroes buffs suited to large maps, but that probably introduces other problems. The simple truth: the more diversity, the more impossible it becomes to achieve perfect balance.

And yet balance is so important! How to handle this then? In Awesomenauts we had the problem that one map (AI Station 404) had a single lane at the centre, bunching up everyone. This gave characters with strong area-of-effect attacks (like Raelynn) too much of a benefit. We ended up modifying this map (into AI Station 205) and removing the old version from ranked matchmaking. The downside to this solution is that we lose some diversity in map layouts.

This is just one solution. Another would have been to show the players which map they were getting, so they could avoid certain characters when they feel they are underpowered on a specific map. This would allow us to keep the maps diverse, but at the cost of character diversity, since each map would probably see a more limited set of characters being used. In an ideal world one would find balance tweaks that influence only specific characters on specific maps. However, balance is so complex that such solutions do not always exist, or cannot be found.

Variety can also make a game too complex. I recently finished Advanced Warfare, my very first Call of Duty experience. At the beginning I was immediately overwhelmed by the number of guns, grenades, dashes and options. This is likely due to the series' yearly updates, which force them to add something every time to make it fresh again. At the end of the campaign I still couldn't remember the buttons for half the things I could do. This increase in possibilities adds burdensome complexity, requiring more explanations and tutorials. 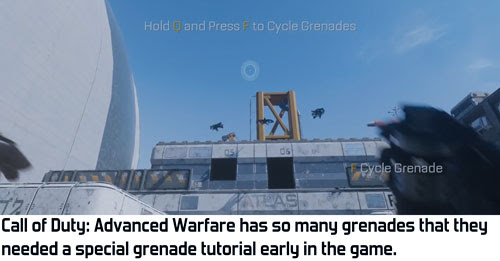 We also see this in Awesomenauts: with every character we add it becomes more difficult for beginners to get into the game. In every match they encounter another new Naut they don't know how to fight yet. Having more characters adds longevity and depth, but might make the experience during the first few hours worse for some players.

As a final example I would like to discuss my own hobby project Cello Fortress. Cello Fortress is a hybrid between game and live performance, which means that players only play it for ten minutes each during an event (have a look at this trailer to see how it works). In such a short playsession I can hardly explain anything, so the game needs to be extremely simple. Sometimes players come to me afterwards and ask why I didn't add more diverse weapon. The answer is really simple: because there already is so much I need to explain and communicate during those ten minutes. Variety often adds complexity and there is a limit to how much a player can stomach in such a short session. 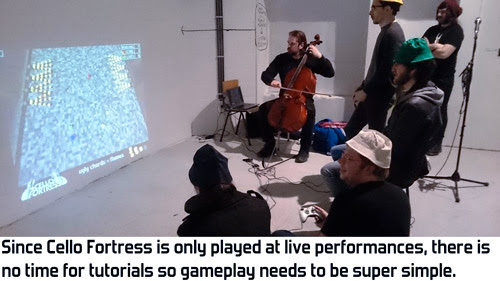 I love gameplay variety. My favourite game of 2014 is Far Cry 4, exactly because there is such a big open world where I can do all of these different things. Variety is also super important in our own games Awesomenauts and Swords & Soldiers. But it is important to keep in mind that adding diversity almost always comes with a cost somewhere, so you shouldn't be reckless with it. Add variety, but do it deliberately and take into account the trade-offs it always brings.

Special thanks to Roderick, founder of Leeuwenhart Publishing, for helping me improve my English writing skills. Roderick is the writer of the young adult book Pindakaas & Sushi (in Dutch) and did some freelance writing for Awesomenauts.
Posted by Joost van Dongen at 12:07