Games as expression / Proun as me

What goal does a game developer have when he makes a game? This is a very interesting question, and one that cannot be asked often enough. I think the most common answers can be summarised as one of these two:


(Note that in this blogpost, I am ignoring serious games, advergames and political games, which are games with different goals than these two. These are interesting topics in their own rights, but I don't want to talk about them today.)

Obviously, there are lots of subtleties to my two types of game development goals. Making money is not just about how much copies you sell at what prices, or how many in-game items you sell. It is also about how much making the game cost in the first place.

"Giving the player the best game" can also be interpreted in many ways. The most obvious interpretation is trying to get the highest review scores, but it can also mean other things. Niche games can be really good for a limited audience, and at the same time also really bad for everyone else. And I have been told that in Japan, game development is very much about fan-service: if gamers love a game, then making lots of sequels and derivative games is a service to the fans. In the western world we sometimes frown upon this and judge that they are abusing the franchise with quick games to make as much money as possible, while it may really be very good fan service. This is a very different view on what is the best thing to do for the gamer.

Of course, most developers try to aim for both goals: make a good game that also makes lots of money. This is also our strategy at Ronimo Games: we try to make awesome games, but we are also a company, so we also need to earn enough money to make a living. We believe that these goals can coincide really well, though: good games have a better chance at selling well.

Money and quality don't always have to agree, though: free to play games often base their design choices exclusively on item sales statistics. Surprisingly, there are a lot of things that make the game less fun, but increase revenue. I will get back to that in a later blogpost, though, because that is a big topic all by itself, and I am getting to the point of this blogpost now, which is that there is more than money and quality:

Games can also be made as self expression.

The music in Proun is what it is, because I felt it was what had to be there. Lots of people told me they thought the graphics and gameplay should go with techno, but that is not how it felt to me. It felt like something in the direction of the speed of Rockabilly and the cheerfulness of Dixieland. So that is what is in the game.

The best example of the impact that designing a game from my own expression has, can be found in the lack of numbers on the opponents to show their rankings. Players often complained to me that they wanted to see how the computer players were ranked, so I experimented with adding numbers on top of the balls. This really worked: I asked some 15 people to test the game and they all preferred to see this like this. However, I personally hate these numbers: they clutter the minimalist graphics and make the eyes focus on the wrong things. So I turned them off. Despite 100% of the playtesters liking them, I turned them off. Because I didn't like them. I would never have made that choice if the goal was to make the best game for the player. Yet I did. 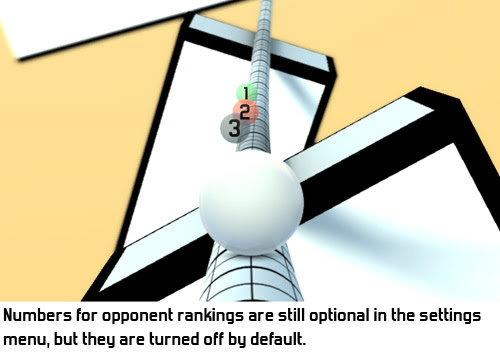 Don't get me wrong, though: I do care whether players like Proun or not. It makes me very happy and proud that Proun is getting such positive feedback as it is. I am human enough to be influenced by how other people think about my work. The point of this blogpost is just that that was not the main goal in making Proun.

I think making games from your own expression is an interesting starting point to do something different. Many of the greatest artists in history worked like this. For example, Van Gogh expressed himself through his paintings. He sold only one painting during his life, but he is now considered one of the greatest painters ever to have lived, and he is one of the founding fathers of all 20th century art. Van Gogh is known today for how his (distorted) personality shines through in every aspect of his paintings. I think the Van Gogh of games has probably not appeared yet, and I think when he does, he will change our perception of what games are. I think it is time more game developers start treating games as expression, and in the process they will broaden our minds. 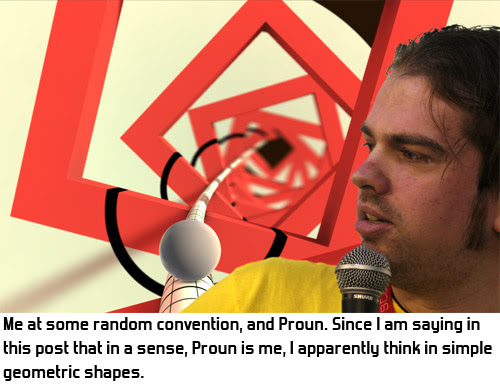 (Image from an interview with me on Indiepubgames.com.)
Posted by Joost van Dongen at 10:01