From melee to ranged: the most difficult design decision in Awesomenauts

Many people probably won't realise this, but while Awesomenauts may feel like a logical translation of the MOBA genre (games like DotA and League of Legends) to a 2D platformer, the design process was in fact long and difficult. Striking the right balance between tactical gameplay, platforming combat and match flow took a long evolution, with tons of experimentation and careful design. A little bit of that process shows through Sheriff Lonestar's evolution, which I talked about last week.

Awesomenauts' design originally featured tons of features that didn't make it into the game. Probably the most striking of those is the disappearance of most heros' melee skill. Originally all classes in Awesomenauts had both a ranged skill and a melee skill, including Lonestar. Looking back, this surprises me, since the current distinction between ranged and melee characters feels so natural. It took us a long time to figure this out, though!

Originally we wanted to make something with some similarities to a brawler, so the melee skills that every character had were very strong. They also had a ranged weapon, but in the early balance of the game you had to get close to do some real damage. This was a constant gameplay headache during early development. With all the characters and droids, gameplay is just too chaotic to make melee combat work. Most combat came down to standing in front of each other and just bashing the attack button to do maximum melee damage. Nevertheless, we had a certain vision for the game, and several team members fought valiantly to keep the melee combat central. So we explored lots of melee mechanics to find a way to make it work.

The biggest problem was that everyone just stood in front of each other and bashed the punch button. We first tried solving this by adding depth to the combat. We added combos (every third attack is stronger if you time the button presses right), we added two buttons for a fast and a slow hit, we even added a parry button: a defensive move that if pressed at the right moment would fend off a hit and cause the attacker to be stunned for a short moment.

However, all of these bumped into the same problem: if more than one opponent is standing in the same spot, this quickly turns into massive chaos. For example, it is impossible to time your parries if three opponents stand in one place and attack with different timings. 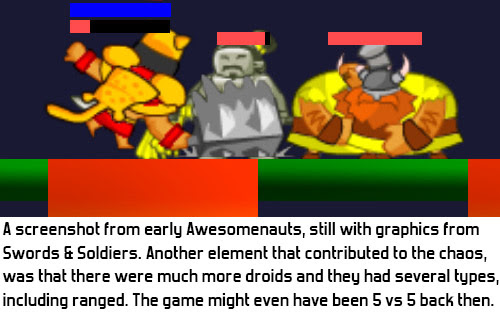 Other games often solve this by changing the AI. For example, Assassin's Creed lets part of the group wait, so that enemies roughly attack in turn. Another solution for group combat can be found in Shank and Batman Arkham City, where many of your attacks stun or knockback enemies, allowing the player to temporarily keep some opponents out of the battle and focus on one or two enemies at a time. However, both of these solutions totally fail to work if the opponents are human players: being stunned a lot is no fun, nor is waiting for your turn to attack. 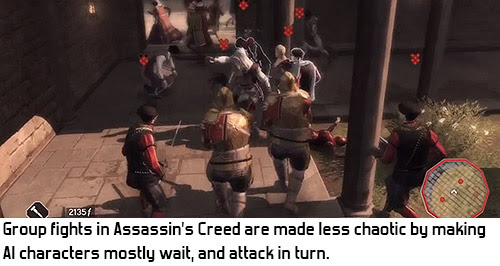 Another thing we tried to make the combat more dynamic, was adding a 'lunge' attack. This was a game mechanic where if you are in the air, you can press a button to home in on an enemy and kick him from above. This made it more useful to keep jumping and moving, but definitely didn't decrease the chaos.

We even experimented with letting teammates collide with each other, so that no two players could stand in the same spot. This turned out to feel very frustrating: your allies were now always standing in your way and sometimes you couldn't hit an enemy because a droid was standing in front of him already.

Several team-members really wanted to keep the melee mechanics in the game, but at some point our designers (Fabian and Jasper) got bold and simply removed all melee skills for one playtest. It turned out that this instantly fixed all these problems. Everyone keeps a little bit of distance from each other and you don't need to all stand in the same spot anymore to attack. Also, jumping became way more important, because you can evade bullets and aim at opponents at the same time!

This was one of the biggest breakthroughs in the design of Awesomenauts. The result was so convincing, that of the original six Awesomenauts, only Leon ended up with a melee skill. All the others turned ranged and it worked great!
Posted by Joost van Dongen at 12:10