So far I have focussed all my efforts for Cello Fortress on the gameplay. Controlling a game with a live cello is a big challenge, both technically and in terms of game design. Now that that is turning out well, the next step is to get rid of the prototype art and give the game real graphics. I have been thinking a lot about the exact visual style and the goal is of course to make Cello Fortress look really good. While the current version of Cello Fortress does not contain any of these visual ideas yet, today I'd like to show my inspirations, and some visual experiments that I did.

The base inspirational image for Cello Fortress' visuals comes from the special edition booklet to Radiohead's album Amnesiac. It is a really noisy and small image, and the scan makes it even worse, but the core of it is this: extremely low-polygon mountains with extremely low-res textures, so that there are big square pixels on the flat triangles. 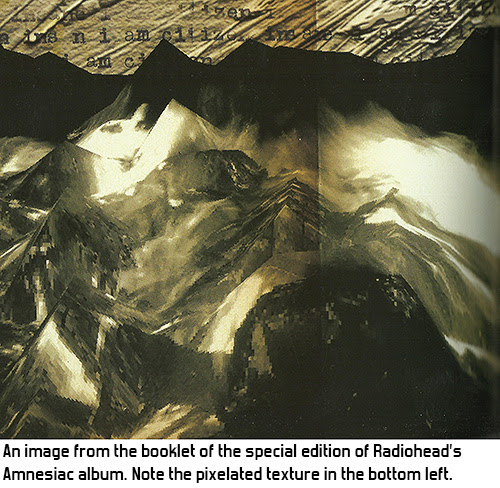 Taking this idea, I did a quick experiment in 3D Studio MAX. I just piled some pyramid-like shapes in the scene and put on some textures, without any intend on making a real composition or anything finished. I didn't want it to actually be as rough as the Radiohead image, so I added lighting and depth of field blur to it. 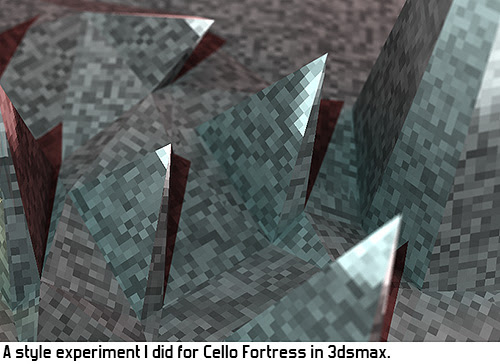 The other big influence comes from an indie game called Teleglitch. In Teleglitch, whenever you shoot the colours on the screen are ripped apart. This gives a very raw and powerful effect, so I wanted something similar. Skip to 58s in this video to see the effect in action:


Gameplay footage from Teleglitch, check the effect after 58s

Of course, I wouldn't want to just copy that, so I came up with something different that was inspired by this effect: bullets and explosions deform the landscape in 3D with a rough noise. I added this effect to my little 3D Studio MAX testscene and made this little previz animation that shows the effect in action, much to my satisfaction:

At this point I actually thought I had copied the effect from another Radiohead video, but I couldn't find it anymore. In my memory, Yorke's head deformed in exactly the same way whenever he held his finger close to his head. After a lot of searching I discovered the video was called "Go To Sleep", but to my surprise the effect is very different here. Instead of deforming, they animate the number of polygons in his head, which looks quite different, as you can see here. (Note that in 3D Studio MAX, this can be done very easily by animating the Optimise modifier.)

So my inspiration turned out to be completely different from what I had remembered, but my own result looks good, so I am happy. ^_^ This kind of process is something I like a lot: if I add my own interpretation to something that inspired me, it becomes something new. This also happened with Proun: it was strongly inspired by Kandinsky and Rietveld, but by adding my own ideas, it became instantly recognisable as something else, something of my own.

At this point, I concluded rawness was my goal. I found another great example of the vibe I wanted in a trailer for Luftrausers, a game by our friends and neighbours from Vlambeer. I really like the extreme vibe they managed to achieve:


Luftrausers by Vlambeer, coming soon to PS3, Vita and PC!

From here, it seems quite simple to conclude what Cello Fortress' visual style should be: raw, pixels, big polygons, extreme effects, noise, screen shakes, grey. However, more recently I discovered some other images that I find extremely inspiring, but that contradict that. They also work with the big-polygons-big-pixels style, but are much less raw. Just have a look at these beauties: 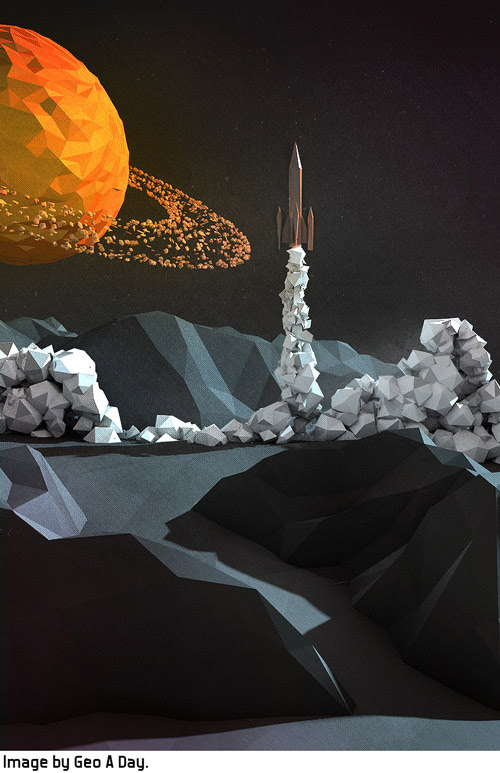 These images from the fantastic Geo A Day and JR Schmidt combine a lot more colour and smoothness with the sharpness of the polygons, and I'd love to make something like that. However, they are quite at odds with the roughness I was previously aiming for.

The final element that has been inspiring me for Cello Fortress, and that I think will combine very well with the images above, is the tilt shift effect that is seen in the new Sim City. It is also found in tons of random videos on Youtube, like in "The Sandpit", which, if you have never seen it before, you need to watch right now. Tilt shift is basically just an extreme depth of field blur that makes everything look small. I also think it looks absolutely gorgeous.


Tilt shift in the new Sim City (which, by the way, is a great game, and much better than the 6.5 Metacritic currently has it at because of those DRM shenanigans...)

Having all these elements, I am not sure yet how I shall mix them. I expect some kind of combination of all of these ingredients, but I am really curious how raw Cello Fortress will end up exactly. Knowing myself, there is a good chance it will turn out a lot more smooth, like my Solid Motion series.

Regardless of what it ends up being exactly, I hope it ends up both unique and awesome! Next week I will release a new gameplay trailer for Cello Fortress, still with the old prototype graphics, and after that I'll get cracking on these graphics!
Posted by Joost van Dongen at 18:28