New song: The Remains of the Mountain

Here's my newest song! It's an atmospheric piece, more ambiance than real song. I think the atmosphere is pretty strong on this one, I hope you like it!

Visit music.joostvandongen.com for an MP3 download of this song.

This song is actually an improvisation I recorded back in 2014. It's four layers of cello and one layer of... a pan's metal lid! Because why not.

Back in 2014 I liked the result, but it was too rough to use. I didn't think I'd manage to capture the same feel if I were to extensively practice the piece and record it again, so I abandoned this piece. Since then I've learned a lot more about editing recordings and fixing issues. Especially, I recently bought Melodyne, which is a great tool for fixing incorrect pitch and timing in recordings. With this I managed to get this song to a point where I'm actually happy with the result.

Also, here's a little bit of advanced music theory that I applied in this song. This song contains a bunch of very long chords without any vibrato, so the exact pitch of the chords is very audible. The opening chord for example is a major third. If you make that pitch perfect for modern tuning, the chord is actually slightly out of tune. I explained that years ago in this blogpost, but I had never gotten around to actually applying that knowledge. Now, using Melodyne's precise pitch control, I finally could. I've pitched the top note of the opening chord slightly lower than it would be on a piano, given the major third chord just intonation (also called "pure intonation"). While it's possible to play like that right way, my cello skills aren't good enough to control the pitch I'm playing that precisely in a recording.

Similarly, the minor thirds, fifths and major sixths in this song are also just intonation. Unfortunately Melodyne couldn't figure out some of the chords, so I couldn't apply it everywhere.

Oh, now that I'm talking music: my album is coming out in just two weeks! It will release on streaming platforms (Spotify, YouTube and others), and I'll also sell it on CD, including a bonus disc without the narrator. Send an email to joost@joostvandongen.com if you'd like to buy a physical copy. It doesn't contain The Remains of the Mountain, but it does contain 47 minutes of other awesome cello pieces I composed. I'm really looking forward to finally sharing it with the world! 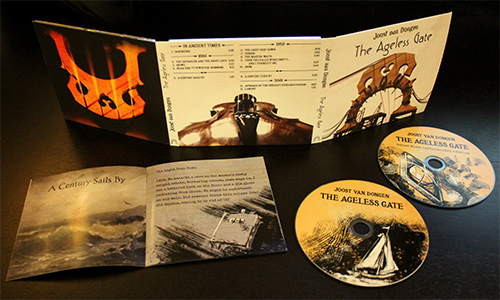 The CD edition of my album contains a 16 pages booklet with art by Marissa Delbressine, and a bonus disc with a version of the album without the narrator (so purely instrumental).
Posted by Joost van Dongen at 14:17