At Ronimo Games we recently announced our new game, Awesomenauts, and today we have released the first trailer!

There is also a bunch of new screenshots on the Awesomenauts website.

The first thing everyone notices here is the incredible theme song that Sonic Picnic created. They did a great job at reviving eighties hair metal and created just the right tune to get gamers pumped up for some hot action with the Awesomenauts! This will shine even more once we reveal the intro animation (!) that comes with it...

However, I would like to point your attention at something that few people will notice with these short bursts of gameplay footage: the graphics. When we made Swords & Soldiers, we hardly had any tools, as I described previously on this blog. Since then our team has grown and we have spent many months creating real-time editors for levels, animations and particles.

During Swords & Soldiers, our engine (the RoniTech 1) was a very minimalist creature, but now with Awesomenauts the RoniTech 2 has evolved into a grown-up multiplatform engine with tools and everything else one expects from a full 2D engine.

The result is that artists can decorate our worlds and animations with all kinds of details. Leafs move in the wind, waterfalls flow in the background, dust swirls up when you walk and we even have some aliens peeking from behind rocks once in a while. The level in the trailer contains some 6000 objects, and that is excluding the static ground over which the player walks (and which actually fills half the screen). Many of those 6000 objects are particle systems that emit dozens of particles. If you look at this trailer really closely, you can see all kinds of details and parallax layers. 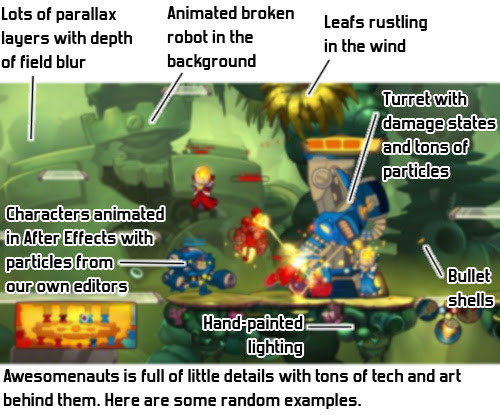 As we release more info and footage of Awesomenauts over the coming months, I will show clearer examples of this, and discuss how we managed to create a real-time editor that gives artists the possibility to literally animate every property of every object. And I guess I will also have to discuss the challenge of getting a good framerate in the vicinity of team of artists-gone-wild...

Anyway, for now enjoy the awesome trailer! And as soon as I get back to regular posting on this awesome blog, look forward to lots of awesome articles about the awesome tech of the awesome Awesomenauts!

(Sorry, from now on I will try to keep the usage of the word 'awesome' to a minimum...)

PS. Next week, when the storm that is called E3 has lessened a bit, I will release a new trailer of Proun and announce the exact release date and method!
Posted by Joost van Dongen at 09:00