On this blog I have talked a lot about the graphics of Proun, but so far I have hardly discussed the gameplay. Last week's trailer got lots of reactions and some of them were wondering whether the gameplay is deep enough to remain fun. (Actually, it's the internet, so things were worded a bit more extreme... ;) ) So let's have a look at how I designed Proun's gameplay, and why.

The core concept guiding Proun's design is simplicity. The more things that need explaining to the user, the worse the design. So I basically went by the well-known design philosophy easy to learn, hard to master. I don't think all games always have to have a very simple core, but I do think focussing on the basics and making those as good as possible is a good start for almost any game.

Since I had these really minimalistic abstract graphics for Proun, I felt the gameplay should also be minimalistic. Something than needs a dozen buttons to play would definitely not fit the rest of the package. So Proun, I pretty much went the same way: easy to learn, hard to master. I wanted this to be a pure racing experience that is focussed on having fun by improving your racing skills. The core is really simple: press left and right to evade obstacles to go as fast as possible. So this is very much twitch gameplay in which you try to improve your racing skills and remember the track.

This kind of twitch gameplay is often most fun when you can quickly try again and again and again, each time hoping to do a little bit better. Two games have been released in the past year that expertly show how to do this well: Super Crate Box by Vlambeer (who happen to be my neighbours), and of course Super Meat Boy. Proun's tracks are a bit longer than the average life/death cycle of these two games, but they do have a somewhat similarly fast experience based on lots of retries to do a little bit better.

A nice benefit of going with a core that is easy to learn, is that Proun is not just suitable for hardcore twitch gamers, but also for people who hardly game at all. Just like De Blob before it, this makes Proun an excellent game for festivals and museums. Festival visitors don't do tutorials, and they walk on really quickly, so they need to be able to enjoy themselves immediately. Proun is also excellent for small children: my 4 year old nephew enjoys Proun too! :)

The Championship Mode is a nice introduction to get to know the game, and a good way to keep you practising to unlock higher speeds and a bonus track. A good reward structure is really important for any game and though Proun is intended to be a small downloadable experience, I still felt I needed some interesting unlockables: higher speeds and an extra track.

However, Proun really shines when played in Ghost mode. Racing directly against your own previous times exaggerates the competition with yourself and makes it fun to keep trying to get a better time. That is why I made it possible to race against not just the ghosts of your best time, but against the ghosts of all your previous times. The more you have played a track, the more fun this becomes. 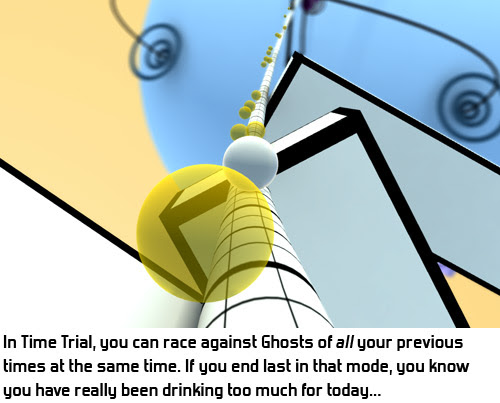 In the very first version of Proun, there was a definite best time for each track: keep accelerating throughout the entire track and don't hit anything to score a perfect time. This sucks. Once you have achieved this once, there is nothing left to do. You cannot do any better. So I introduced several mechanics to shake this up and make sure it is always possible to improve your skills.

The simplest solution to this is having difficulty settings. The higher the speed, the higher the difficulty. On the highest difficulty ("Speed of Light"), you can go four times as fast as on the easiest mode. This make it nearly impossible to achieve a perfect run. I played my own game a million times and I haven't been able to race through any of the tracks without ever letting go of accelerate and without crashing. So here is a nice challenge for anyone getting the game next week: try to win the Speed of Light Championship. The opponents on that difficulty are my own best times and they don't cheat, so if you can beat them on each track, then you know you are more pro than I am! :)

Much more interesting than just increasing the speed, though, is the slowdown that I added when you rotate around the cable. The less you rotate, the faster you go. This means you can improve your time by steering closer past obstacles (which is also more risky), and that you can look for the ideal route through a track. So now there is also a serious challenge in trying to find the way to race through a track with as little rotating as possible.

This core mechanic is already a lot of fun, but it does not really contain that much choice. You always know what you have to do, you just need to do it at the right time. To add an extra layer, I have added chargeable boosts. If you keep accelerating for 12 seconds without hitting any obstacles, you get a boost that you can use any moment you like. When used, a boost will make you go extremely fast for 2 seconds. 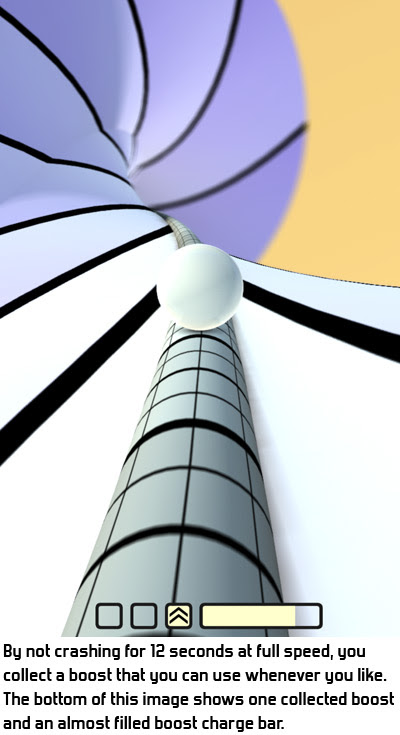 Of course, boosts are a very common concept in racing games, and in Proun they added just that little bit of strategy to take it to the next level. Deciding when to use the boost is a fun mini-game, since crashing into obstacles costs more time than the boost won. On the lowest two difficulties there are plenty of places to use the boost, but once you get to Supersonic speed, it takes some courage to use a boost at all. But if you have the skill to not crash, you go blazingly fast. Boosts are a small touch, but they really add a lot to the gameplay and tension.

In total, Proun's gameplay is very much a less-is-more affair. If you enjoy trying to get the best possible time, Proun will really shine and keep you going for a long time, especially if a modding community comes into being and starts releasing cool levels (which I can only hope, of course, though the first modder tracks have already been made). If you are not this hardcore, I think Proun will still be fun for a couple of hours, due to the different speeds, the award structure, the splitscreen multiplayer, and of course the pretty imagery to look at while racing.

As I said in a previous post, I don't think all game have to be long and I hope that Proun is a small but awesome gem to some. :)

PS. You may have wondered how a paused blog can get so many posts recently. Initially I wasn't planning on pausing this blog for four full months, but finishing Proun took longer than I expected back in February. Well, anyway: Proun is coming next Friday and my blog is hereby officially unpaused! So welcome back! ^_^
Posted by Joost van Dongen at 20:52