Proun OUT NOW for PC! And: the long history of Proun

Yes! After six years of development, Proun has finally been released for PC! I hope you like it! Proun is sold as Pay What You Want, which means that you can set your own price. You can choose to pay nothing at all, or you can pay some amount of money. You can even choose to first get it for free, and then pay afterwards if you like it! As a little extra incentive, you get a short and colourful bonus track if you pay at least $2! To celebrate Proun's launch, here is a new trailer:

So, six years of development, how did that even happen? It's not like Proun is the size of a game like Love, so six years may seem a bit long. In short, there are two reasons:
-I created Proun in my spare time;
-there were long intervals during those six years when I didn't work on Proun at all.

Since Proun pretty much evolved around my life and many projects during the past six years, I feel it makes an interesting story to tell how it came to be. :)

The very beginning of Proun happened on the grave of the most failed project I ever did. In November 2004, during our second year at the HKU (Utrecht School of the Arts), our class was split into two groups of thirteen students each. We were to create a race game. Being young and stupid, both groups tried to create really big 3D racing games with unique mechanics. We were way too ambitious and both groups failed horribly. Half the models that were made for our game Speedcore were made with broken bone sets and could not even be put in the game... Speedcore was playable though, it just totally sucked! 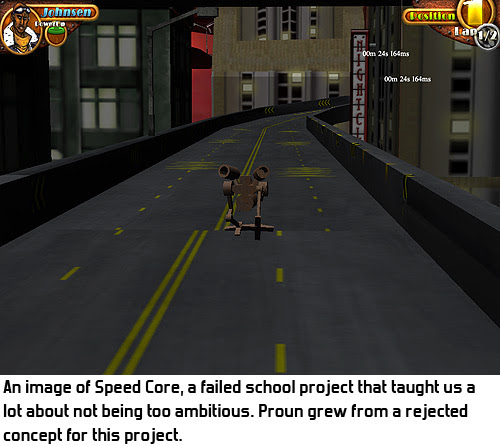 Afterwards, my friend Huub van Summeren told me that he had proposed a really simple project to his group, and that that was rejected as not interesting enough. Oh the irony... He told me it was a racing game in which you rotate around a cable to avoid obstacles. Simple and fun. I really liked how the entire world could rotate around the player, so since Huub was not planning on doing something with it, I started developing it myself. Of course, this is the concept that later became Proun! So, thanks Huub, for the great idea! :)

Being an art academy, the HKU leaves a lot of room for students to do their own projects and get grades for those. So in May 2005, I started working on Proun, then called CableRacer. I was still a student and had to learn a lot about the Ogre engine and generating meshes and bezier curves and such, and I decided to build my own exporters and plugins for 3D Studio MAX. Yet I still got the game up and running in a couple of weeks. It looked terrible and some of the math was pretty broken, but it was already a lot of fun to play. Proun has a really simple concept, but everyone I playtested it on enjoyed it almost immediately! 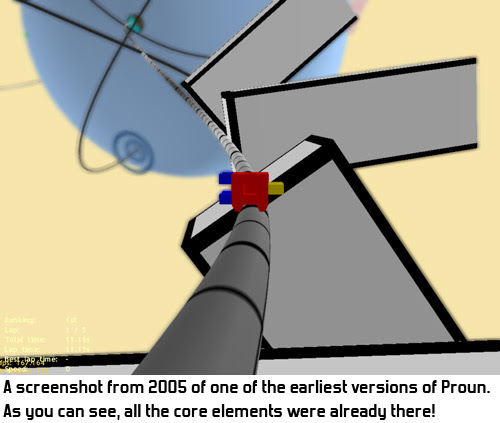 After the Summer of 2005 I stopped working on CableRacer for almost a full year. First I went to Germany to do an internship at the now defunct Collision Studios, where I created 3D normal mapped models for the shooter Red Ocean. A funny coincidence here is that the publisher of Red Ocean was DTP, which is currently also the publisher of our own Awesomenauts! 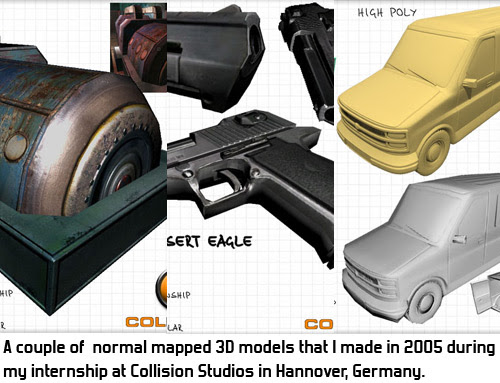 At the time I didn't know whether I wanted to be a programmer or a 3D artist. I am really happy that I did my internship as a 3D artist, though: I have been a full-time programmer on everything but Proun since then and I would never have experienced what it is to be an artist if I hadn't done that at the time. And in case you are wondering: I had a lot of fun doing 3D art and programming and in the end only became a programmer because we didn't have any other programmers for Ronimo Games, and already had enough artists.

When I came back from my internship, the school project De Blob started right away. Since I already had a good core code base for Proun, development for De Blob started with stripping Proun and working from its foundations. This way we got the 3D physics gameplay of De Blob running in a couple of days and could continue from there. I didn't work on Proun during this period, but when De Blob was finished, I immediately went back to Proun and added all the improvements I had made for De Blob to Proun as well. 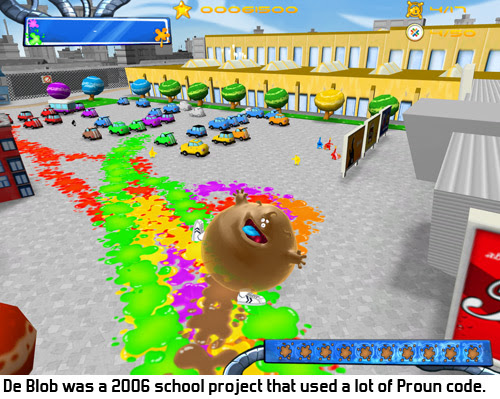 So now we get to Summer 2006. The biggest topic to me at that point was Proun's graphics. I first wanted to go for Mondriaan's Victory Boogie Woogie, but Mondriaan's work is so incredibly straight, that I didn't see how to get that to work with the curves of Proun. 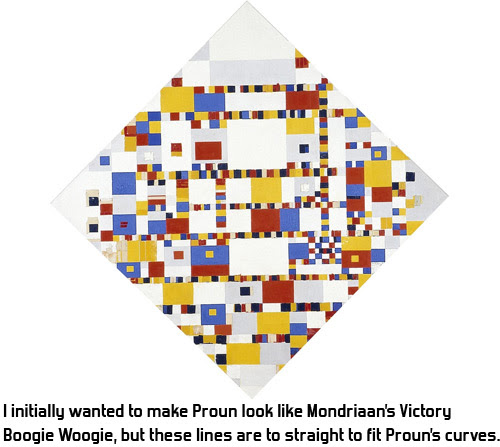 So instead I went for my new love: Kandinsky. The expressionist abstract works of Kandinsky are my favourite paintings in general and I wanted something similar for Proun. However, I wasn't that good at shader writing yet and had no idea how to get this to work. Just have a look at the horrible picture below to give you an idea... 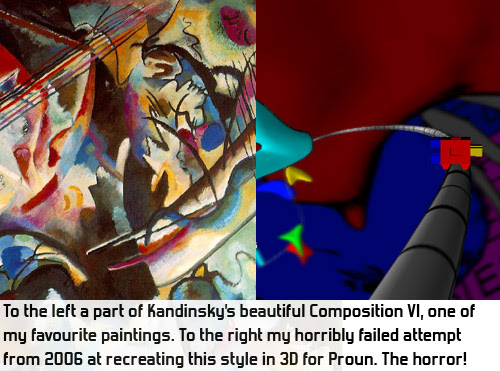 While looking through a book about Kandinsky, trying to think of a way to do 3D graphics in that style, my eye fell on Kandinsky's later geometric abstract works. These are beautiful as well, and here I immediately knew how to implement this! I had already been doing lighting of 3D scenes for many years at that point (I started playing around with 3D Studio MAX when I was 13!), so I immediately started experimenting with shapes, colours, and above all: lighting. 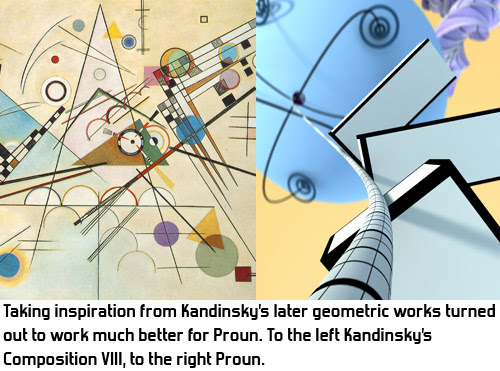 Now just when Proun's graphics and gameplay were finally coming together, I got so busy with various other projects, that I had to stop working on it for three full years. The first project was another school project, this time an assignment for Guerrilla. This became a crowd control game set in the Killzone universe, and just like De Blob before it, it was build on the tools and core code of Proun. 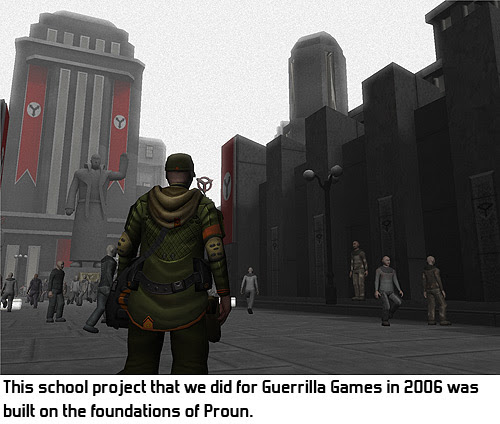 After this project, we started Ronimo Games and started working on our first official Ronimo game, which was again build upon Proun's foundations. This project was called Snowball Earth and in the end got cancelled because we couldn't find financing for it. We intend to release the prototype at some point, but for now I cannot say too much about that. Anyway, keeping to tradition, this project was built on Proun's foundations as well.

Of course, after that we started working on Swords & Soldiers, which became our first console game at Ronimo, and went on to win awards and get tons of really good reviews!

Anyway, so Proun is a spare time project, why didn't I work on it next to Ronimo at that time? Well: I was also studying Game & Media Technology at Utrecht University and finishing my Master's Thesis for that was my spare time occupation at that point. I spent my weekends writing and researching for that during two years.

So when that was finally finished in June 2009, I spent three weeks gaming all day during my long Summer vacation. And then I got bored and made a 3D baroque church dome. Euhm, a what? Somehow, once in a while I just have to make a 3D model with lots of ornamented pillars. No, don't ask why, I don't know either! 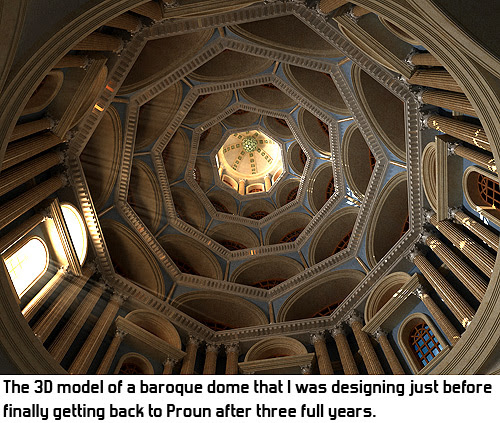 At some point I got stuck on the baroque dome, due to a computer that was too slow and a lack of skill with truly realistic lighting and materials, and decided to give Proun a try once again. After three full years, I hardly knew in what state I left the game, but I quickly got up and running with it. I had learned a lot at Ronimo during the past three years, so I went about development a lot quicker now, and released a trailer a couple of months later.

Around this time I read an article in a newspaper about an exhibition at the Van Abbe Museum that featured a number of El Lissitzky's works called Proun. I had been looking for a proper name for CableRacer for ages and somehow this fictive word that El Lissitzky had made up perfectly fit my game. El Lissitzky made dozens of works called Proun and calling my game like that as well felt like a nice homage to the abstract pioneers of the early 20th century. 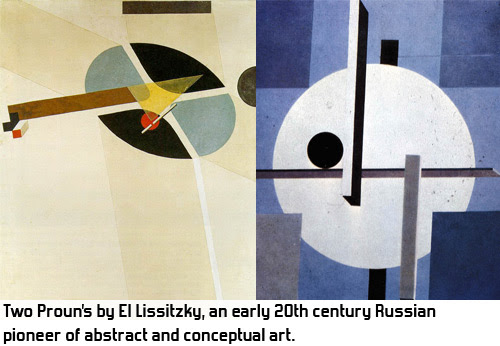 At this point I thought the game was almost finished, and I had the luck of finding someone who was willing to help out with the music and sound of Proun. I had initially planned to do everything myself, but I couldn't get my songs to sound as good as I wanted, and I hated making sound effects. So it was a small miracle to me when Matthijs (from Control Magazine) introduced me to Arno Landsbergen. Arno had made an album called Dirty Rock. That album not only sounds great, but also reminded me of early David Bowie, who happens to be one of my heroes! So I rejoiced when Arno got on board! Arno improved and produced my compositions, and created all the sound effects for Proun.

Little did I know at that point that I was going to spend two more years creating more tracks and polishing everything to make it a complete game... But I have to say, if I look at the end result, I feel very proud that I actually finished it, and I hope you will like it! During those six years I grew a lot, both as a person and as a game developer, and I think this shows in the final result! ^_^ 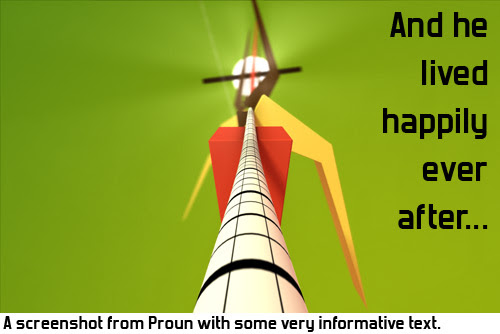 Congratulations on reading through this enormous wall of text. Now head over to the Proun website and download that game!
Posted by Joost van Dongen at 02:55